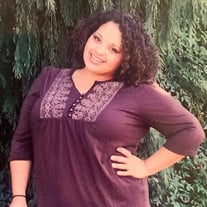 Funeral Services for Kendra Nicole Parker will be held at 10:00 AM Monday, October 7, 2019 in Fletcher Auditorium at Murray State College. Family hour will be held on Sunday, October 6, 2019 at DeArman-Clark Funeral Home from 2:00 - 5:00 PM. Interment to follow at Erin Springs Cemetery in Erin Springs, Oklahoma. Kendra Nicole Parker of Tishomingo was born August 21, 1986 to Sandra Parker in Oklahoma City. She passed away on October 2, 2019 in Tishomingo, OK. Kendra taught math at Murray State College, where she hoped to instill an appreciation and understanding of the often difficult subject to everyone. To this goal, she loved teaching students in the zero-level courses and founded the MSC Pi Society. After graduating from Norman High School in 2005, she attended Oklahoma City Community College and graduated in 2014 from East Central University with a bachelor's degree in math. Kendra was currently working on her master's degree, with dreams of earning a doctorate in mathematics. Her math skills were especially helpful when she competed on the Price Is Right earlier this year. Kendra was the first contestant on stage in the episode and went only a few dollars over on her showcase. Kendra recently began painting classes, producing several works for her home. She also loved to travel, particularly to the beach. She hoped to live to on a beach someday. She was a member of the Eastern Star and Alpha Gamma Delta sorority. Kendra is preceded in death by her grandparents, Ollen and Joyce Parker; brother, Joshua Wayne Parker; great-grandfather, Francis Parker. She is survived by her mother Sandy Parker; uncle, Wayne Parker; first cousins, Dearth and Dayne Parker; cousins, Ramona, Jennifer, Jessica, and Olivia Lindsey; great-aunt Audra Dennis, many other cousins, and her sorority sisters who will deeply miss her.

Funeral Services for Kendra Nicole Parker will be held at 10:00 AM Monday, October 7, 2019 in Fletcher Auditorium at Murray State College. Family hour will be held on Sunday, October 6, 2019 at DeArman-Clark Funeral Home from 2:00 - 5:00 PM.... View Obituary & Service Information

The family of Kendra Nicole Parker created this Life Tributes page to make it easy to share your memories.

Funeral Services for Kendra Nicole Parker will be held at 10:00...