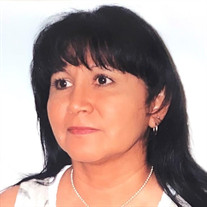 Karan (Brown) Carroll was born on August 10, 1957 to Caroline Krebbs and Ezekiel Brown in Fillmore, Oklahoma. She journeyed home and entered into rest on Monday, January 11, 2021, in Ada, Oklahoma at the age of sixty-three. Karan graduated from Milburn High School in 1976. She attended Oscar Rose State College on a basketball scholarship where she played for the first women’s basketball team. She was part of a long legacy of great women basketball players coached by Glen Moore and played in the Oklahoma State basketball championship tournament all four years of high school. She earned a certification as a Licensed Practical Nurse from the Southern Oklahoma Vo-Tech. Karan worked in home health as a Case Manager and a nurse most of her life until her retirement this past year. Karan married Dewayne Carroll on May 4, 1987 and has been married to the love of her life for the last thirty-three years. Karan has two daughters, Te’Ata and Tonya Loper, and one son, Trent Carroll, four granddaughters, MaCayla and Steavi Claire Purcell, Patience Green, Channa Greenwood, and two grandsons, Tripp and Brave Carroll. Karen’s faith in Christ was strong and raising her family in church knowing the Lord was very important to her. Laying the foundation in having a relationship with the Lord was one of her life’s missions, she was a member of the Ravia Church of God. Karan’s most proud title was her role as a “Grammy”. Her life love was to spend time with her children and beautiful grandchildren, always supporting them in their interests and activities. She thought her grandchildren could literally do no wrong and was their biggest champion. She was the family matriarch and enjoyed big family gatherings, she was the designated cook preparing her famous Indian tacos and pashofa. She was very proud of being a full blood Chickasaw/Choctaw Indian and loved serving and caring for Indian people as a nurse. Karan was sweet and quiet with a kind-hearted nature however she could be honest with her thoughts, when she spoke she was straight to the point and didn’t beat around the bush. She could be really funny, unintentionally, with her dry sense of humor. Anowa chipisala’cho (Until I see you again) Survivors include husband, Dewayne Carroll of Mannsville, Oklahoma; children, Te’Ata Loper of Milburn and son in law, Ken Purcell of Tishomingo, Tonya Loper of Tishomingo, Trent Carroll and wife Farrah Tiger of Moore, Oklahoma; grandchildren, MaCayla Purcell of Mustang, Steavi Claire Purcell of Milburn, Patience Green of Tishomingo, Channa Greenwood of Tishomingo, Tripp Carroll of Madill, Brave Carroll of Moore; siblings, Cecil Brown of Durant, Janett Lane of Ravia, Mildred Taylor of Tishomingo, Maxine Brown of Tishomingo, Jeanine Smith of Wynnewood, Margie Arkansas of Tishomingo, Lorene Taylor of Tishomingo; parents, Caroline Krebbs; parent in law, Alvin and Thelma Carroll; numerous nieces and nephews. She is preceded in death by her father, Ezekiel Brown; grandparents, Clamy Brown and Taylor Brown; brothers, Michael Brown and Johnny Lee Brown; sister, Georgia Shaw; grandchild, Tiger Carroll. A graveside service to honor and celebrate the life of Karan Carroll will be held at 11:00 AM on Friday, January 15, 2021 at Bullet Prairie Cemetery.

Karan (Brown) Carroll was born on August 10, 1957 to Caroline Krebbs and Ezekiel Brown in Fillmore, Oklahoma. She journeyed home and entered into rest on Monday, January 11, 2021, in Ada, Oklahoma at the age of sixty-three. Karan graduated from... View Obituary & Service Information

The family of Karan Carroll created this Life Tributes page to make it easy to share your memories.