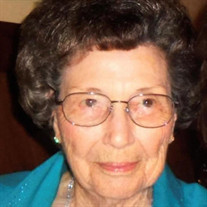 June Rutherford, 95, passed away on Friday, January 21, 2022 in Durant, Oklahoma. June was born on August 1, 1926 in Dustin, Oklahoma to Joseph C. Taylor and Della (Rains) Taylor. She grew up and attended school in Dustin, graduating from Dustin High School in 1944. At the age of 18, June rode the Greyhound bus from Dustin, Oklahoma to San Francisco, California to work for Core of Engineer during World War II. While in San Francisco she met and married Bill Knight. He was killed overseas during the war. After returning to Oklahoma, she was employed by an Insurance Co. in Oklahoma City for a number of years. June married Charles Rutherford on September 10, 1949 in Oklahoma City. They have resided in Tishomingo since that date, where they were in the Ranching and Abstract business. Charles preceded her in death March 3, 2007. She was a member of the First Baptist Church in Tishomingo for 57 years, working with children and youth groups as a Sunday School teacher and G.A. counselor. June enjoyed participating in many school and other related activities with her children. A lifetime member of Epsilon Sigma Alpha and former members of B&PN Club and GFWC Holisso Club. June was preceded in death by her parents, Joseph and Della Taylor; first husband, Bill Van Knight; husband of 57 years, Charles Rutherford; son, Ricky Rutherford; four brothers, Joseph Taylor Jr., Marvin Taylor, Wayne Taylor and George Taylor; 2 sisters, Maurice Abbott and Vermetta Hogan. Those she leaves to cherish her memories are her daughter, Robin Jemison of Tishomingo; grandson, Curtis Jemison and wife Ma’Kenzee of Tishomingo; brother, Curtis Taylor and wife Patsy of Ridgecrest, CA; four sisters, Joyce Puckett of Holdenville, OK, Aileen Taylor of Alma, AR, Gayle Henry of Wichita, Kansas and Evelyn Harmon of Tulsa, OK. Several nieces and nephews Funeral services will be held at 11:00 AM Thursday, January 27, 2022 at MSC Fletcher Auditorium with Pastor Jon Smith to officiate. Interment to follow at the Tishomingo Cemetery. Family hour will be held on Wednesday, January 26 from 6:00 - 8:00 PM.

June Rutherford, 95, passed away on Friday, January 21, 2022 in Durant, Oklahoma. June was born on August 1, 1926 in Dustin, Oklahoma to Joseph C. Taylor and Della (Rains) Taylor. She grew up and attended school in Dustin, graduating from Dustin... View Obituary & Service Information

The family of June Rutherford created this Life Tributes page to make it easy to share your memories.