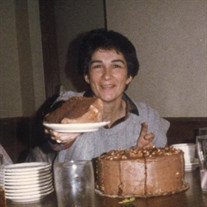 Funeral Services to honor and celebrate the life of Joyce Gwendolyn Willard - Kopczynski will be held at 2:00 PM March 17, 2020 at DeArman-Clark Funeral Home Chapel. Interment to follow at Condon Grove Cemetery. Family hour will be from 6:00 - 8:00 PM on Monday, March 16. Joyce Gwendolyn Willard Kopczynski, age 79, passed from this life in the comfort of her own home in McKinney, Texas on March 12, 2020. Joyce was born on December 6, 1940 in Milburn, Oklahoma to Arlton and Violet Willard. She attended elementary school at Fillmore, high school at Milburn and went on to attend a Jr. College in California. She spent her working years doing a multitude of things; a bus driver, health minister, nutritionist teacher, followed her husband’s military career but most importantly was being a homemaker and making she everyone’s needs were met before her own. Being in a military marriage she lived a lot of places from Oklahoma all the way to Rhode Island and in between; Chicago, Baltimore, California, Virginia and Texas. Her hobbies consisted of cooking, gardening, sewing, painting, playing the guitar and being an advocate for Christian education. She loved the Lord and wanted everyone to become a believer. She was the family historian and had a servant’s heart. Joyce was a fun, loving, joyful, cheerful person, patriotic and adventurous woman. Her best times were spent with her family caring for them, laughing and singing. She was married for 60 years to the love of her life, Don Kopczynski. He said it was love at first sight and he got a rose to love and cherish her every day. Joyce is preceded in death by her husband, Don Kopczynski; parents, Arlton and Violet Willard; grandson, Jon Arlton Kopczynski Jr.; brothers, Richard, Royce and Merle; sisters, Susan Antoinette. Those she leaves to cherish her memories are her children, Jon Kopczynski, Jennipher Kopczynski Nixson and husband Ben; grandchildren, Heather Jordan and husband George of Manassas, Virginia, Rachel Nixson of Gardendale, Texas, Samuel Nixson and wife Keisha of Midland, Texas, Sarah Nixson Abel and husband Will of Lewisville, Texas; great grandchildren, Kassidy Nanna and husband Grant of Winchester, Virginia, Keith Perry of Fairfax, Virginia, Hailey Branham of Virginia, Alex Kopczynski Manassas of Park, Virginia; 2 great-great grandchildren, Penny Nanna and Finn Nanna; sisters, Nakeeta Nichols of Ada, OK, Norma Chaney of Tishomingo; and a host of nieces, nephews and friends who will deeply miss her.

Funeral Services to honor and celebrate the life of Joyce Gwendolyn Willard - Kopczynski will be held at 2:00 PM March 17, 2020 at DeArman-Clark Funeral Home Chapel. Interment to follow at Condon Grove Cemetery. Family hour will be from 6:00... View Obituary & Service Information

The family of Joyce Gwendolyn Willard-Kopczynski created this Life Tributes page to make it easy to share your memories.

Funeral Services to honor and celebrate the life of Joyce Gwendolyn...