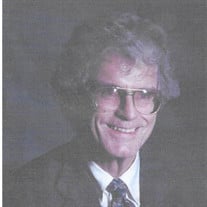 Joseph Allen Hazlitt; November 29, 1927 - September 4, 2020 Joseph Allen Hazlitt was in born in Pauls Valley, Oklahoma, to John Piper Madden Hazlitt and Rebecca Blanche Hightower Hazlitt. (Known throughout his life as Joseph, Joe and J.A at different times). His older brother John was just a year ahead of him. While still very young, Joe’s family lived in Oklahoma City, Enid, Walters, Hobart and Wichita, KS as their father worked in sales positions. In 1931, the family moved to Garden City, KS, where John Hazlitt sold farm machinery and Joe’s younger sister, Rebecca Jane was born to the family. Her arrival forged lifelong bonds between the three siblings. When the dustbowl began to impact farmers, sales in farm machinery sagged; banks were ordered to close, and after a time, the family relocated to Mount Vernon, Illinois in 1934. Following their parents to Illinois, Joe and his siblings rode the bus with their grandmother all the way from Pauls Valley to arrive at a farm house with a large yard, barn to play in and cows to milk. By 1940, Hazlitt Heating Service had been formed by Joe’s father selling coal-stoked furnaces. Joe and his brother John were paid 20 cents an hour to clean furnaces and chimneys rising at 4:30 in the morning hours before school and on Saturdays. Wanting to defend the country following the bombing of Pearl Harbor in 1941, Joe’s father joined the Seabee’s in 1942 (Navy) and the family returned to Paul’s Valley. Upon his graduation from Pauls Valley High School, Joe, followed his dad and joined the Navy along with his brother in 1944. Upon completing military service; he attended Oklahoma University in Norman; and received his degree in journalism. He continued on to Southern Methodist University (SMU) to obtain a master’s degree in divinity. While attending SMU, he met Martha Anne Davis, walking her home from their bible study. He and Martha Anne married May 24, 1953, and Joe entered the United Methodist ministry. During seminary, he began his pastoral duties in Thackerville, OK and the beginning of a long ministry that spanned 16 different church assignments across Oklahoma in the United Methodist Church Conference (UMCC). Martha (Anne) was his support and team mate during these years as they did church work and raised their family in these communities. Joe was musical and played the piano by ear often leading singing with his family and others. His strong tenor voice and guitar was always appreciated by his church members, family and friends. In service to the UMCC, the Hazlitts traveled across Oklahoma moving their family multiple times over their 29 years together. They served church communities in Thackerville, Jones, Eric, Stillwell, Muskogee, Shattuck, Sayre, Dewey, St. Marks in Tulsa, Hinton, Red Rock and Bethel churches in a combined ministry; Marlow, and Choctaw. During this span, Joe and Anne’s family grew to six children; with many church-related, school and community and family activities. Joe participated in clergy travels over the years including state annual conferences, clergy gatherings, and international trips. He was selected by the UMCC to participate in a ministerial study trip to England for an in-depth study of John Wesley in Epworth, England, where the origins of Methodism begun under Wesley’s vision. The trip was significant for the rest of Joe’s life. He organized and facilitated several trips to Israel as well to visit important sites in the Christian tradition. When Anne was diagnosed with cancer in 1972, Joe, the older children and his mother, Blanche became her caretakers during the long illness until her death in 1982. During this time, Joe and his family were the received outpourings of kindness and love from many in these church congregations who stepped in to help and exemplified love to the family. After Anne’s death, he continued in church pastoral work serving at Skyline Ministry in Oklahoma City, and churches in Hydro, Wynnewood, and Waurika. Joe retired from pastoral church care in 1991 and he and Juanice Brawley (Niece) married in August that same year; settling in Wynnewood in “the Pink House”. They set about to many home improvements,

The family of Joseph Allen Hazlitt created this Life Tributes page to make it easy to share your memories.