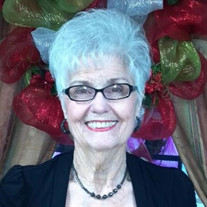 Johnnie Lene Durant passed away Monday January 31, 2022. Born in Wapanucka, Oklahoma on March 12, 1932 to John and Emma Reed. Johnnie was the middle child in between older sister Emma Jean Reed and younger brother JW Reed. Johnnie graduated from Wapanucka High School in 1949 and then attended business school and later worked as a telephone operator. Johnnie met her future husband Wesley in Wapanucka and later married him on July 14, 1951. They moved to Albuquerque, New Mexico where Johnnie became the proud mother of three boys Ron, Reed and Randy Durant. With Wes' career in the Air Force, they were stationed in Abilene, Texas, Clovis, New Mexico, Okinawa, Japan and ultimately retiring in Lubbock, Texas. Johnnie and Wes always desired to move back to Oklahoma and that dream came true in 1994 when they moved to Tishomingo. Johnnie was preceded in death by her husband Wesley Durant, and her siblings Emma Jean and JW. She is survived by Ron and Lisa Durant, Reed Durant and Randy and Amy Durant. She is also survived by grandchildren Shannon, Jereme, Taylor, Clayton, Kristin, Emily, Lois, Hayden, Camdyn, Bensyn, Kyan and Aizley, along with spouses. Johnnie also welcomed great grandchildren - James, Brooklyn, Shiloh and Addison. She also is survived by numerous nieces, nephews, cousins and friends. Johnnie will be cremated and buried at Rose Hill Cemetery in Wapanucka next to her husband Wesley. The family would like to thank all those who have helped and sent condolences. The family would especially like to thank Debbie Wyatt who was such a wonderful friend to Johnnie and the family these last years. In lieu of flowers, donations may be made to the American Cancer Society. A celebration of life will be held at 1:00 PM on Saturday, February 19, 2022 at DeArman-Clark Funeral Home Chapel. Arrangements were made under the direction of DeArman-Clark Funeral Home. Online condolences may be sent to dearmanfuneralhome.com

The family of Johnnie Durant created this Life Tributes page to make it easy to share your memories.