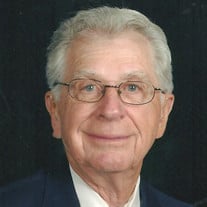 Funeral Services to honor and celebrate the life of John Reid Hutchens will be held at 2:00 P.M. on Wednesday, July 10, 2019 at First Baptist Church in Tishomingo, OK with Pastor Luke Holmes to officiate. Interment to follow at Tishomingo Cemetery. When the Tishomingo businessman and his wife had baby boy #3 in 1927, they could not predict the path this child would follow. Coming of age in post-depression, post-World War II rural Oklahoma, their boy experienced the ups and downs, challenges and struggles faced by most families of that time. But, a smart, savvy young man emerged, intent not on following his older brothers in to the professions of their choosing -- banking for one and architecture for the other -- but by putting his stake in the family business and becoming what was then a little-used term, business entrepreneur. This young man, born Lawrence Paul, took more than his father’s business sense and spirit of independence; he took his name, changing his own to that of his dad. People called him “Little Reid” from an early age, but he had his own contribution to make and set about doing just that as he started life with a focus on education. Reid enrolled in Murray State College in 1946 where he excelled in sports, lettering in both football and basketball. Reid also excelled in academics becoming a member of Phi Theta Kappa honorary scholastic society. After graduating from Murray Reid continued his education at Oklahoma A&M where he received a degree in Marketing and Business and was also recognized academically by being inducted in to the Mu Kappa Tau scholastic society. Upon his return to Tishomingo he reconnected with Murray football by becoming the home game announcer. Reid settled in to the family business with his father and spent the next 21 years running Hutchens Chevrolet and Oldsmobile. During those years he became an active leader in the Tishomingo community spending more than 20 years in the Rotary Club and 44 years in various roles with the Chamber of Commerce. He was instrumental in getting a full service hospital to Tishomingo and served on the Board of Controls of the Johnston County Memorial Hospital in the 1950’s and 1960’s, and the board of directors of the Southern Area Health Association. Big Reid Hutchens, a World War II flight instructor, taught his sons to fly and Reid Junior took to the air, not only flying his own small aircraft, but leading the development and enhancement of the local airport for other recreational pilots to use and also as a key asset in the area’s economic development. As part of his commitment to area growth, Reid served on the State Chamber of Commerce and the Johnston County Economic Development Committee supporting efforts to recruit businesses and professionals to Tishomingo and Johnston County. He was an active member of the Southern Oklahoma Development Authority throughout the 1970’s. Reid’s business interests evolved but his entrepreneurial spirit remained strong. He sold the auto dealership in 1971 and turned his business acumen to the oil and gas industry. Hutchens owned, operated and sold gasoline to at one time 25 convenience stores throughout southern Oklahoma and did so for the next 20 years. During this time Reid continued to emphasize not just his own company growth, but his investment in the community as well. He led the organization of a new bank in Tishomingo, a move which would represent a significant and long-term impact on his career and his life. From the initial bank charter of the Bank of Johnston County in Tishomingo, Reid became an investor in the First National Bank of Madill, served on the boards of directors of the Texhoma Bank in Kingston and the First National Bank of Stillwater. Through this experience he met his banking partner and business mentor, Gene Rainbolt. With Gene, Reid was named to the Board of Directors of the Bank of Durant, he served as the Chairman of the Board of the Bank of Johnston County and led the merger of these institutions with Rainbolt’s other Oklahoma banks. He later helped to organize the operation into BancFirst, the largest independently-owned state banking institution in Oklahoma. Hutchens served on the board of BancFirst from its inception in 1987 to 2004. Reid has always had a knack for combining his personal hobbies and interests with his own entrepreneurial spirit. An avid hunter and fisherman throughout his life, Reid organized a group of local sportsmen in the purchase and development of a hunting property called Goose Hill, known throughout the area as the best goose hunting spot in North America. With friend and local postman, J.C. Bennett he learned the ranching business, raising, breeding and selling Angus cattle on an acreage of land just outside Tishomingo. Reid spent 25 years as one of Tishomingo’s volunteer firemen. He became a Life Time Member of the Johnston County Historical Society and was active in the arts as a supporter of Tishomingo’s own “Way, Way, Way Off Broadway Players.” On July 1, 1989 Reid carried the Olympic Torch through Tishomingo on its way to the 1992 Olympic Games in Barcelona, Spain. Hutchens raised two daughters in Tishomingo, Kathy Leonard and Vicki Cunningham, both of whom inherited their father’s business acumen and today run their own business endeavors. Reid Hutchens, Jr. sold his oil and gas business in 1990 and moved with Patsy, his bride of more than 70 years, to Oklahoma City. Hutchens is preceded in death by his parents, John Reid and Wineva Hutchens, and his brothers and sister Richard Hutchens, Carroll Hutchens and Louise (Sugar) Hutchens Shea, and by his son Jimmy Hutchens, who died of cystic fibrosis at age 10. He is survived by his wife, Patsy Hutchens, his two daughters, Kathy Leonard and Vicki Cunningham, his two grandchildren, Holly Victoria Thompson and Jason Reid Carter; and, his great grandchildren, Sydney Kathleen Shannon, Cassidy Kane Shannon, Aubrie Ella Thompson, and John Reid Carter.

Funeral Services to honor and celebrate the life of John Reid Hutchens will be held at 2:00 P.M. on Wednesday, July 10, 2019 at First Baptist Church in Tishomingo, OK with Pastor Luke Holmes to officiate. Interment to follow at Tishomingo Cemetery. When... View Obituary & Service Information

The family of John Reid Hutchens created this Life Tributes page to make it easy to share your memories.

Funeral Services to honor and celebrate the life of John Reid...