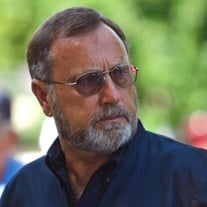 Jimmy Don Toney, age 75 was a resident of Bromide, Oklahoma. Jim passed away at home on October 22, 2021 after a battler with cancer. He was born on January 23, 1946 in Atoka, Oklahoma to Ray and Vivian Toney. Jim attended school in Bromide in his early years and graduated from Wapanucka High School. He also received a degree in Auto Body Repair from Okmulgee Institute of Technology. Jim is a veteran of the Vietnam War, he served with the 9th Infantry Division, Company E, 3rd Battalion, 60th infantry Mobile Riverine Forces from January 1968 – January 1969. He returned from the war and worked for Bob Bolten in Tishomingo Repairing cars as well as starting his racing career driving dragsters. He raced for several years. We all know how he loved to go fast, matter of fact he was still riding a Kawasaki 1400 Ninja. Throughout the years he worked at several different auto body repair shops. He also built two body shops of his own in Durant, Oklahoma, before he found a job working at S & L Body Shop. He stayed there until he retired in 2001. Jim married his wife Terry on May 17th, 1974, they made Bromide their home and began raising cattle. Jim was a member of the Bromide Baptist Church. He served as Mayor of Bromide for several years before his death. Over the years, Jim has developed so many special relationships with the racing community. He loved racing and attending NHRA and the Nascar races; going to army reunions and reconnecting with fellow veterans was also a very special time for him. Restoring old cars was a passion of his that he did in his spare time. He leaves behind his wife, Terry of the home; daughter, Kelli Holland and husband Steve of Tecumseh, OK; son, Donnie Toney and wife Amy of Bromide, OK; daughter, Leslie Toney of Bromide, OK; grandchildren, Jett Toney, Judd Toney, Jay Toney and Hannah Holland; brother, Bill Toney and wife Janet; nieces, Renee Burris, Traci Williams and Michelle Coyle; also, many veteran friends as well as racing friends that he considered family. Visitation will be held on Tuesday, October 26, 2021 from 5:00 – 7:00 PM at DeArman-Clark Funeral Home. Graveside services will be held at 10:00 AM on October 27, 2021 at the Wells Valley Cemetery between Bromide and Wapanucka. Allen Hicks to officiate. Honorary pallbearers will be Larry Hallmark, Leon Petete, Kenneth Cleveland, Max McCurry, Joe Harp and Tommy Hitchcock. In lieu of flowers donations can be made to Johnston County Reach Out, PO BOX 773 Tishomingo, OK 73460.

Jimmy Don Toney, age 75 was a resident of Bromide, Oklahoma. Jim passed away at home on October 22, 2021 after a battler with cancer. He was born on January 23, 1946 in Atoka, Oklahoma to Ray and Vivian Toney. Jim attended school in Bromide... View Obituary & Service Information

The family of Jimmy Don Toney created this Life Tributes page to make it easy to share your memories.

Jimmy Don Toney, age 75 was a resident of Bromide, Oklahoma....