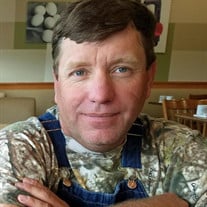 Jimmy Vernon Britt, a resident of Sulphur was born November 29, 1968 in Ada, OK to Karen and Vernon J Britt. He passed away September 26, 2020 at Okla. City, OK at the age of 51 years 9 months and 27 days. Jimmy grew up in Sulphur and graduated from Sulphur High School. He started building a reputation as a hard worker when he was nine years old, cleaning the meat market for $10 a week at his dad’s store, Jim’s Quick Stop on 12th street. He continued developing his work ethic when his dad started Jim’s Discount Grocery on Highway 7. That same appreciation for a job well done carried over to farming and ranching. He enjoyed time on the tractor, simple meals in the hayfield, and seeing a tight stack of hay in the barn or the collection of round bales lined up, ready to feed in winter. He loved having cattle and bought his first herd as a teenager. As an FFA officer in high school, he lived out the FFA creed, for he knew the “joys and discomforts of agricultural life” and embraced them. He shared many treasured moments fishing and hunting with his friends and family. Jimmy had a lifelong appreciation for the outdoors and a good cup of black coffee. In 1990, Jimmy started his career at US Silica in Mill Creek bagging sand. He worked hard and moved through many positions, working production and maintenance at both the South and North plants. Around 2016, he became a salaried employee and finished his career as North Plant Superintendent. US Silica recognized Jimmy through many SPOT awards, both from Mill Creek and company-wide, and he was proud of developing a product loading program that earned significant additional revenue for the plant and was implemented company-wide because of its success. Jimmy was known to be an exceptional leader who truly cared for his co-workers. Having shared 30 years of his life with many of them, he considered those he worked with family. He was married to Ginger (Fugate) Britt at Oak Grove on December 22, 1990. For over three decades, he was devoted to his wife Ginger. He felt his dreams came true when his family grew by three children, Moriah, Torrye, and Jake. He told them daily that he loved them, both through words and actions. He showed them how to pray and how to be practical. He taught them to look at all the angles and to consider what was “beyond the target” whether shooting a gun or making decisions. They teased and laughed together, and he calmed them when they felt upset or frustrated. No matter the problem or mistake, they knew dad could help them fix it. Jimmy respected and honored his dad, Jim, and cherished his mom, Karen. His love extended to his brother Shannon who was also his dearest friend. He often spoke of the lessons he learned from his beloved grandparents and his many aunts and uncles. He was preceded in death by his grandparents: Mattie & Cecil Britt and Short Binderim. Survived by his Wife: Ginger Britt, of Sulphur., OK Daughters: Moriah Patterson & Sean, of Sulphur, OK and Torrye Britt, of Sulphur, OK Son: Jake Britt, of Sulphur, OK Parents: Jim & Karen Britt, of Sulphur,OK Mother-in-law: Sue Grizzle, of Durant, OK Grandmother,: Lena Ruth Binderim, of Sulphur, OK Brother: Shannon Britt & Valerie, of Sulphur, OK Brother-in-law & sister-in-law: Lindsey & Tyler Garone Brother-in-law: Corey Fugate Nieces & Nephews: Caleb Britt, Madison Britt, Ben Britt, Gabriel Garone, Sophia Garone, T.J. Horn, Gemma Fugate, Lily Fugate, Rick Jones & Ashley,, Randi & Brad Wilson; Memorial Services will be held Saturday October 3, 2020 at 11:00AM at Crossway Baptist Church officiated by Pastor Lee Armstrong and assisted by Craig Lemley online condolences may be sent to www.dearmanfuneralhome.com

Jimmy Vernon Britt, a resident of Sulphur was born November 29, 1968 in Ada, OK to Karen and Vernon J Britt. He passed away September 26, 2020 at Okla. City, OK at the age of 51 years 9 months and 27 days. Jimmy grew up in Sulphur and graduated... View Obituary & Service Information

The family of Jimmy Vernon Britt created this Life Tributes page to make it easy to share your memories.

Jimmy Vernon Britt, a resident of Sulphur was born November 29,...