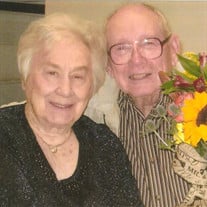 Funeral Services to honor and celebrate the life of Jerry Newton Underwood will be held at 2:00 P.M. on Tuesday, May 21, 2019 at DeArman-Clark Funeral Home Chapel. Interment to follow at Troy Cemetery. Jerry Newton Underwood age 83, passed away at Blue River Nursing Home in Tishomingo, OK on May 18, 2019. Jerry was born in Reagan, OK on March 16, 1936 to the parents of Isaac and Carrie (Tuley) Underwood. He married the love of his life Eileen Hruska on January 28, 1974 in Nebraska and have been inseparable for 45 years since. Jerry attended Murray State College where he earned his Associates Degree and went on to attend Southeastern in Durant and obtained a degree in Indian History and Art. He was very passionate about his Indian Heritage and was presented the highest honor given by the Chickasaw’s which was the Silver Feather in 2009. Jerry was passionate when it came to working with children and spent 25 years working with the boy scouts. He was a very accomplished beadiest and would teach classes at the senior citizens buildings. Jerry most recently was a naturalist for the Chickasaw Nation Park in Sulphur for 8 years. Eileen would describe Jerry as being very romantic, giving and loving person; always bringing her little gifts that he would find such as stones and wildflowers, which he loved. Jerry is preceded in death by his parents, Isaac and Carrie Underwood; 5 brothers, Cecil Underwood, David Underwood, Freddy Underwood, Benny Underwood and John Ralph; 3 sisters, Pauline Green, Janice Fairchild, Loretta Hamilton. Those he leaves to cherish his memories are his wife, Eileen Underwood; brother, Charles Underwood and wife Oneita; sister in law, Judy Underwood; Oklahoma Adopted Family, Danny, Weston and Wyllene Holland and a host of many nieces, nephews and friends who will deeply miss him.

The family of Jerry Newton Underwood created this Life Tributes page to make it easy to share your memories.

Funeral Services to honor and celebrate the life of Jerry Newton...