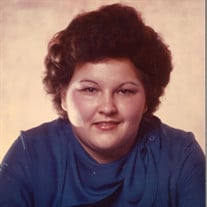 Funeral Services to honor and celebrate the life of Jeanetta Brown will be held at 2:00 PM on Monday, December 30, 2019 at Calvary Baptist Church. Interment to follow at Troy Cemetery. Family will receive friends from 1:00 - 5:00 P.M. at DeArman-Clark Funeral Home. Jeanetta Lou “Shorty” Brown was born to Ruel R. Brown and Esther Fern (May) Brown on July 9, 1965 in Tishomingo, Oklahoma and had been a life-long resident of Johnston County. She was raised in the small town of Troy and attended Mill Creek Schools. She graduated from there in 1983 while simultaneously attending Murray State College. After graduation, Jeanetta moved with the family to Tishomingo and began working at Dee’s Manufacturing until the closing of that facility in 1996. She began working at Sooner Foods and eventually worked her way up to Night Manager. Working there until her health began to suffer and had to leave in 2015. Calvary Baptist Church was her place of worship and where she felt at home. Even though her health sometimes hindered her, she was always eager to be there. She would often speak of how honored she was that Jim Schammerhorn would trust her to lead their Sunday School Class when he and Glenda were out of town. She was always an avid reader and had a huge collection of books. One of the things she loved to do was to make quilts for the family as well as her friends. She would sit for hours hand painting scenes and then, using the quilting rack handed down from her grandmother, quilt them. She was always eager to show off her finished works. But beyond all the work and the hobbies, her favorite thing in the world was to share time with her nephews and nieces; of which there were plenty. Jeanetta passed from this life on December 24, 2019 at the age of 54 (although she never claimed to be older than 29). She was preceded in death by her parents, Ruel and Esther Fern Brown; sister, Betty Parker, brother-in-law Daniel Parker, brother-in-law, Tommy Tisdell; nephews, Billy Parker and Kevin Tisdell. Those she leaves to cherish her memories are her sisters, Bobby Sue Seabolt of Muskogee, Karen Jones of Tishomingo, Patricia Tisdell of Reagan; brother, Mike McSwain of Troy; sisters, Judy Balentine and husband John of Tishomingo, Darla Downs and husband David of Calera, brother, Jamey Brown and wife Monta of Troy; sister, Guyla Hart and husband Mike of Tishomingo; 9 nieces 9 nephews, and an abundance of great and great-great nieces and nephews. “There are far, far better things ahead than any we leave behind” C S Lewis

Funeral Services to honor and celebrate the life of Jeanetta Brown will be held at 2:00 PM on Monday, December 30, 2019 at Calvary Baptist Church. Interment to follow at Troy Cemetery. Family will receive friends from 1:00 - 5:00 P.M. at DeArman-Clark... View Obituary & Service Information

The family of Jeanetta Lou Brown created this Life Tributes page to make it easy to share your memories.

Funeral Services to honor and celebrate the life of Jeanetta...