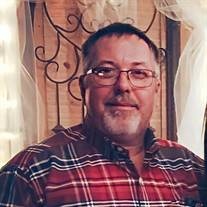 James Richard Helm Jr. (Jimbo) was born March 11, 1969 to James Richard (Jimmy) & Peggy Helm and passed away January 4, 2020 at his home in Byars, OK . He is survived by: his wife Paige of Byars, daughter Brielle Helm of Byars, daughter Myla Ashton Sprabery and husband Tyler of Stratford, daughter-in-law Leah Helm of Stratford; Five grandkids:Jaxon Sprabery, Kase Mavrix Sprabery, Livy Sprabery, Lyla Sprabery, & Jakely Helm; his father James Richard Helm (Jimmy) of Byars & his mother Peggy Helm of Pauls Valley; two sisters Debra Bittle and her husband Keith of Stratford & Shara Rogers and her husband Mike of Byars; one brother-in-law Chad Gillham and his wife Shawnda of Pauls Valley; and numerous nieces, nephews, cousins and friends. He was preceded in death by: his son James Richard Helm III (Trey), his niece Brittney Michelle Rogers, and his nephew Jacob Keith Bittle (Jake). Jimbo graduated from Pauls Valley High School in 1987. He met and married Ronneile Paige Gillham on August 6, 1988 and settled in Maysville, OK where they began their family. He had numerous certifications and accreditations and could do just about anything he set his mind to. He always enjoyed providing for his family. He loved his work family and friendships especially at Maysville Grain and OEC, but he had no greater job than being a husband, father and especially a Pop-Pops. Jimbo was the type of dad that all kids want to have; happy, funny, helpful, and always there to listen or just be there when you needed him. He loved to spoil his grandkids and said they were the light of his life. He found great joy in the little things like Sunday dinners with his family, shooting armadillos in the pasture, helping his father with their cattle, or watching OU football. *BOOMER*! Jimbo was an avid hunter and fisherman who loved spending time at the lake and was hoping to retire to be a camp host and just travel. He enjoyed sitting around the fire listening to Trey and Tyler play the guitar and reminiscing about all the fun he had as a kid. Jimbo was one of the friendliest guys around. Those who were close to him can't tell you how many times they would be late or held up somewhere because Jimbo was carrying on a conversation with a complete stranger, just like they were old friends. The man never met a stranger. He was the kind of man that all men should strive to be; he would give you the shirt off his back if he thought you needed it. Just watching kids faces light up and seeing the joy in their eyes as Jimbo played Santa Claus from year to year let you know just what a good heart he had. Jimbo was someone we can all take a lesson from and most certainly was proud to be a Christian and a man of God. He was an amazing role model for his children and grandchildren to remember. The family appreciates all thoughts and prayers during this tragic time. Visitation; Tuesday January 7, 2020 at DeArman/Pickard Funeral Home Stratford, Oklahoma from 6:00 PM to 8:00 PM. Services; 2:00 PM Wednesday January 8, 2020 in the Trinity Baptist Church Pauls Valley, Oklahoma. Officiating; Rev. Chuck Shilling and Rev. Dwayne Johnson. Burial McGee cemetery Stratford, Oklahoma.

The family of James (Jimbo) Richard Helm JR created this Life Tributes page to make it easy to share your memories.