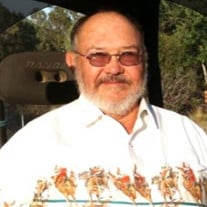 James Bauman, 83, of Milburn, died on Thursday, February 18, 2021, after a months-long battle with complications from COVID-19. James was born, October 7, 1937, in Hobart, Oklahoma, to E.J. and Lillian Bock Bauman. He spent most of his early years in Roosevelt, OK, and moved to Tishomingo when he was a senior in high school. James graduated from Tishomingo High School in 1956 and married Nina Rushing that same year on November 15, 1956 in Cordell, Oklahoma. He joined the National Guard in 1955. Together, James and Nina combined their love of learning, teaching, and traveling, and they supported each other in their individual pursuits of higher education. James earned an associate degree from Murray State College in 1961, a Bachelor of Science from the University of Oklahoma in 1963, a Master of Science from the University of Oklahoma in 1966, and an associate degree in gunsmithing from Murray State College in 1988. James was a lifelong learner, fueled by a sincere curiosity about the world and every person he met. This curiosity about people and places led James and Nina to work as educators in Oklahoma, New Mexico, and Alaska, where they taught in multiple communities, eventually settling in the remote Pribilof Islands. Anyone who has visited James and Nina’s home can see through carefully displayed natural artifacts, artwork, jewelry, and books what an impact their time in Alaska had on their lives and what an important place it still holds in their hearts. James was a collector of special objects and people. He was curious about his students’ lives and would often quiz them about their personal stories. He made friends for life, maintained a large Christmas card list, and kept in touch with an assorted cast of characters, family, and friends around the country. James was an avid hunter and skilled gunsmith. He was a lifelong member of the NRA and an active member of the Single Action Shooting Society, a competitive shooting organization. James loved animals at least as much as he loved people – a trait many in his family have inherited. In addition to innumerable beloved and well-fed dogs and cats over the years, James was also known to rescue the odd baby raccoon or skunk. James had a tender, generous soul, cared deeply about the wellbeing of the people and animals in his life, and was always quick to offer support and encouragement to those in need. If you were among the many fortunate individuals to know James, be on his Christmas card list, or even to stand next to him in line at the grocery store, then you know the level of quiet attention and genuine curiosity he brought to each of his interactions. In James’ final days, it was not possible for him to be physically surrounded by his loved ones. But just as so many of us carry loving memories of James and his positive impact on our lives, we believe that James knew just how many people loved him in return. James is survived by his wife of 63 years, Nina Bauman; his daughter, Janet Stevenson; grandsons, James and Greg Stevenson; and nieces and nephews, Courtney Bauman, Kevin Bauman, Debbie Krebbs, Larry Krebbs, and their families. James is also survived by many additional special loved ones, including these individuals whom he greatly enjoyed mentoring over the years: Lee McMorries, Cheryl Davis, Zenaida Lestenkof, and Luke Kochutin. James was preceded in death by his brother, Ray Bauman. Memorial services will be held at a later date.

James Bauman, 83, of Milburn, died on Thursday, February 18, 2021, after a months-long battle with complications from COVID-19. James was born, October 7, 1937, in Hobart, Oklahoma, to E.J. and Lillian Bock Bauman. He spent most of his early... View Obituary & Service Information

The family of James Charles Bauman created this Life Tributes page to make it easy to share your memories.