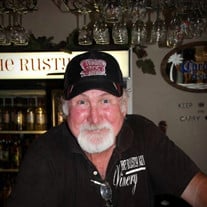 Jackie Allen Alexander, 71, of Sulphur, Oklahoma, passed away on February 3, 2022. He was a legendary character - known by most as a hunter and fisherman, lover of crime television, and an avid Trump supporter – much to his youngest daughter’s dismay. He started each day with Folger’s coffee, several games of solitaire on the computer and Channel 9 News. He loved playing the guitar and was fond of warbling, although he detested all Christmas music and transformed into the resident Grinch every holiday season. He was also known to streak to the mailbox in his underwear in hopes of no one noticing. He had a life-long love affair with Vienna (VI-EE-na) sausages consumed directly out of a can and delighted in peanut butter and maple syrup mixed together and spread over saltine crackers. He was a fan of any beer that was cheap and, later in life, acquired a taste for wine – thanks to the Rusty Nail Winery. He always made sure that his guns were loaded and that his police scanner was working – just in case. To anyone who knew Jackie, it was apparent that he took fashion cues from no one, regularly donning camouflage pants with either a flannel shirt (“winter look”) or a t-shirt with cut off sleeves (“summer look”). He detested any shirt without a pocket to hold his favorite ballpoint pen and glasses. Practically every pair of pants he owned sported his signature snuff circle on the back pocket, and he owned roughly 57 OU hats. Jackie was born on March 7, 1950, to Charles Allen Alexander and Wilma Inez (Robert) Alexander in the bustling city of Pauls Valley, Oklahoma. He spent his childhood days staying in trouble – “Ornery” was his unofficial middle name. He loved coon hunting and procuring crawfish from the creek to chase and terrorize his little sister, Debbie. He was part of various local bands along with his brother, Wayne, whom he regularly challenged to fist fights. After he graduated from Maysville High School in 1968, he served as a police officer in Wynnewood and went on to become a skilled welder and supervisor for a number of years in the oil industry and for Haliburton. Inspired and strongly nudged by his former spouse of 41 years, Debra, he went back to college and spent the majority of his career as a Registered Nurse. In his retirement years, he was everyone’s favorite bartender at the Rusty Nail Winery where he greeted everyone with a smile or a grumble on his off-days. Jackie was always determined to provide for his family and he was unendingly proud of his children Michelle, Chuck, Melissa and Jason whom he always tried his best to support. He was also a proud grandfather to Ashley, Stacey, Micaela, Jayden, Jaxon, Elliot and Dashiell, and a great-grandfather to Cooper. He is survived by his ex-wife, Debra Alexander of Sulphur, Oklahoma; brother, Wayne Alexander of Wynnewood, Oklahoma; sister, Debbie Sharp of Wynnewood, Oklahoma; and his children: Michelle Alexander-Stephenson of Ardmore, Oklahoma; Charles Alexander of Ardmore, Oklahoma; Melissa Lee Alexander of Boston, Massachusetts; and Jason Alexander of Lone Grove, Oklahoma. Everyone who remembers him is asked to celebrate Jack’s life in their own way, raising a glass of their favorite drink in his memory would be quite appropriate. Instead of flowers, Jackie would hope that you would please consider a donation to The Children’s Heart Foundation to support funding for Congenital Heart Defect (CHD) research. He would have been proud to honor his granddaughter, Elliot Grace, in this way who is living with a complex congenital heart condition. DONATE: https://everloved.com/.../jackie-alexander/donate/checkout. Memorial Service honoring Jackies Life will be Sunday February 6, 2022 at 4:00PM in the Chapel of DeArman Funeral Home, with Rev. Fred Bailey officiating. Arrangements by DeArman Funeral Home of Sulphur. Online condolences may be sent to www.dearmanfuneralhome.com

Jackie Allen Alexander, 71, of Sulphur, Oklahoma, passed away on February 3, 2022. He was a legendary character - known by most as a hunter and fisherman, lover of crime television, and an avid Trump supporter &#8211; much to his youngest daughter&#8217;s... View Obituary & Service Information

The family of Jackie Allen ALexander created this Life Tributes page to make it easy to share your memories.