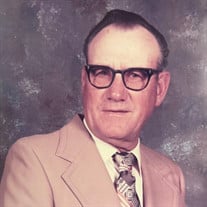 Herbert Leroy Hanlin, 95, passed from this life in the comfort of his home in the early morning hours on December 10, 2021. Herbert was born on November 14, 1926 in Kirksville, Missouri to James William and Bernice Edith (Osborn) Hanlin. He attended school up until the 8th grade and went on to attend Auto School in Puerto Rico. Herbert served our country in the United States Army from 1945 - 1948; a World War II Disabled Veteran who lost his right eye in Puerto Rico. He was a lifetime member of the #38 Pipe Fitters Union. He spent his working years driving trucks, auto mechanic and retired as a pipe fitter. In his spare time, he enjoyed tinkering in his shop, picking up pecans, fishing and sitting on the porch visiting with friends and family. When he married Waukera Washington Bowling (June 3, 1967 in Reno, Nevada) he was too young to be a grandfather, so he obtained the title as “Uncle Herb” to many second cousins. He was readily accepted into the family as a “Good man and wonderful uncle.” Herb was a gentle soul. He moved into the Milburn area in the early 1980’s. Originally from Missouri but quickly a proud Okie. Rapidly he became the neighborhood surrogate grandfather to kids within the square mile. He was always available to just sit on the porch and learn about their day while feeding them candy and drinking cokes. He was a confidante to them when their hearts were broken. Parents knew where to look when the kids ran away from home. The kids would vent to Herb for a few hours and then he would bring them home. He was not an educated man, but what he lacked in education he made up with an exorbitant amount of common sense. He taught the neighborhood kids to work by picking up pecans and how to use common sense to work out problems. He was a dear friend but above all, he was loved by many and will be dearly missed by family and a host of friends. Herbert was preceded in death by his parents, James and Bernice Hanline; son in law, Jeff Franklin; brother, Hubert Hanlin; and sister, Frances Jane Cuculich. Those he leaves to cherish his memories are his wife, Waukera June Hanlin of the home; daughter, Belinda Franklin of Austin, TX; sons, James Hanlin and wife Peggy of Missouri and Jack Hanlin and wife Stephanie of Missouri; brother, Jimmy Hanlin and wife Louise of Missouri; grandchildren, Adria Franklin Smith and Erin Franklin, Brett Hanlin; numerous nieces, nephews and friends. Funeral services will be held at 1:00 PM Wednesday, December 15, 2021 at DeArman-Clark Funeral Home with Pastor John Hazell to officiate. Interment to follow at Tishomingo Cemetery. Those serving as pallbearers will be BJ Keeling, Robby Keeling, Ronnie Keeling, Dakota Martinez, James McGlocklin, Dee Morris. Thank you to the family and friend throughout the years and to those who helped during this prolonged illness. A special thank you to Suzonna Gibson. Thank you to all the staff at Centric Home Health and Hospice, Why We Care Staff, Bonham Veterans Hospital, and Alliance Hospital Durant.

Herbert Leroy Hanlin, 95, passed from this life in the comfort of his home in the early morning hours on December 10, 2021. Herbert was born on November 14, 1926 in Kirksville, Missouri to James William and Bernice Edith (Osborn) Hanlin. He... View Obituary & Service Information

The family of Herbert Leroy Hanlin created this Life Tributes page to make it easy to share your memories.

Herbert Leroy Hanlin, 95, passed from this life in the comfort...