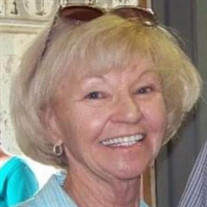 Hazel Upton, 77, passed away on Thursday, April 22, 2021. Hazel was born April 24, 1943 to the late Bunt and Myrtle Hazel Tisdell in Tishomingo, Oklahoma. She grew up on Daube Ranch out in the middle of nowhere, near Reagan, Oklahoma. She had a great childhood, especially being spoiled by her dad. Most can only imagine growing up among cows and horses on Pennington Creek. They did not have electricity until Hazel was 12 years old and her mother cooked on a woodstove. When she was about 15, while attending Tishomingo High School, she met her future husband, John I. Upton. They were married on June 20, 1959. To this union four children were born; Ricky, Debbie, Donna and Ronnie. They were married for 42 years until his passing in 2001. Hazel worked various jobs in her life. She loved being a sales person and she was truly a natural at it. She had the gift of “gab” and never met a stranger. Hazel will forever be remembered as the happiest person you could ever meet. Hazel was preceded in death by her husband, John Upton; parents, Bunt and Myrtle Tisdell; two brothers, Marion Norton and Tommy Tisdell; son, Ronnie (2013); granddaughter, Alicia Bowen (2006). Those she leaves to cherish her memories are her children, Ricky Upton and wife Sue, Debbie Bowen and husband Danny, Donna Upton and Edmond “Skeeter” Thompson; grandchildren, Dusti Dennie (Nick), Dylan Upton, Kristina Noriega (Dylan), Katelyn Bowen (Cody), Justin Upton, Clayton Upton; great grandchildren, Tresley and Tristan; two children that she nannied for the first 5 years of their lives, Katelyn and Connor Kinney; sister in laws, Patricia Tisdell and Betty Palmer; dogs, Sam and Lilly and a host of nieces, nephews and friends from all across Oklahoma who will deeply miss her. A visitation will be held from 10:00 AM to 1:00 PM at the funeral home on Monday. A graveside service to honor and celebrate Hazel’s life will be held at 2:00 PM on Monday, April 26, 2021 at the Troy Cemetery.

Hazel Upton, 77, passed away on Thursday, April 22, 2021. Hazel was born April 24, 1943 to the late Bunt and Myrtle Hazel Tisdell in Tishomingo, Oklahoma. She grew up on Daube Ranch out in the middle of nowhere, near Reagan, Oklahoma. She had... View Obituary & Service Information

The family of Hazel Irene Upton created this Life Tributes page to make it easy to share your memories.