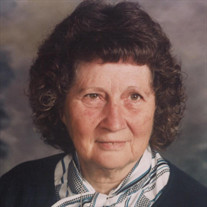 Gloria Lee (Lord) Webb A resident of Tishomingo since 1961, Gloria Webb passed away in her sleep at her daughter Dorine’s home in Tishomingo on Thursday May 5, 2022 at the age of 90 years, 5 months, and 1 day. Gloria was born in Oklahoma City on December 4th, 1931 to the late Benjamin Harrison Lord and Dorothy Mae (Beberstein) Lord. She had two brothers Donald Lord (Deceased) and Ronald Lord. Gloria grew up in Oklahoma City with extended visits to her grandparents’ farm in Alva, Ok. Gloria graduated from Classen High School and then earned a Bachelor of Science in Nursing (BSN) degree from Oklahoma University in 1955, as a student of the first BSN program in Oklahoma. Later in life she earned a Masters in Psychiatric Nursing from Texas Women’s University. She was working as an Obstetric Nurse Instructor at the OU College of Nursing when she met her future husband F. E. Webb Jr, an OU medical student. Gloria and FE were married on December 25, 1956, at the Baptist Temple in Oklahoma City. Gloria and FE divorced in 1977. After the divorce Gloria worked as an ER and Psychiatric nurse at Johnston Memorial, Baptist, and Ada Hospitals among others. Gloria retired from nursing in 1994 and then focused her life on her family and Seven Springs Farm. During her marriage Gloria gave birth to seven children: daughters Dorothy Aline Webb of Stillwater OK, Beulah Dorine (Webb) Scribner of Tishomingo OK, Rebecca Ann (Webb) Rester of Oklahoma City OK; and sons Benjamin Lee Webb (Deceased), Roy Anthony Webb of Tishomingo OK, Floyd Edmond Webb III of Providence RI, and Donald Lee Webb of Houston TX. She also fostered two girls and a boy in difficult circumstances whom she treated like her own children. Gloria and FE came to Tishomingo in 1961 to begin her husband’s medical practice in family medicine. They opened a clinic to the public at 108 Main Street and later in the 1970’s moved the practice to the Webb Clinic on E 24th Street next to the Johnston County Hospital. Gloria and FE built one of the largest homes in Johnston County when they constructed a 10,000sf house on 80 acres north of town across from the future Tishomingo Golf Course. The house, a 3-acre pond, and later an Olympic-sized swimming pool, became the center of Gloria’s (and Tishomingo’s) social and philanthropic life, hosting numerous parties, seminars, scouting campouts, swim meets, and general great times, with lots of food and fun. For almost 30 years, Tishomingo residents spent many wonderful times on the property, and the “Big House” remains Gloria and FE’s legacy. During her life in Tishomingo, Gloria served as the President of the Ladies VFW Auxiliary, the Leader of the local Girl Scout Chapter, and was active in several organizations, including the Tishomingo’s Daughters, the Pennington Creek Aquifer Association, and she served as the organist for many years at the Presbyterian-Christian Church. Many Tishomingo residents will remember her as “the lady on the tractor.” Her interests were numerous and varied, including family genealogy; reading and puzzles; brush-hogging; pecan farming; soil conservation; exotic animals; fostering stray cats & dogs, city politics, maintaining Seven Springs Farm, and especially spending one-on-one time with children and grandchildren. Gloria was a life-long learner who studied aviation to obtain a pilot’s license and woodworking to construct bookcases for her books; Gloria was a passionate believer in non-violence who advised Tish schools to stop using a paddle on students; and she believed that there was a place for everything and everyone. She was an extremely generous woman who used her personal resources to make Tishomingo and so many people’s lives better. Gloria was preceded in death by her parents Benjamin and Dorothy Lord, a son Benjamin Webb, a brother Don Lord, and an ex-husband FE Webb Jr. Those she leaves to cherish her memory are her six surviving children, her brother Ron Lord, her former sister-in-law Jane Cochran, numerous cousins, nieces and nephews, twelve grand-children Sarah (Scribner) Klepper, Leah (Scribner) Lowe, Karen Turner, Teresa (Webb) Carmona, Robert Webb, Bryan Webb, Jeremy Webb, Nathan Webb, Edmond Rester, Johnathan Rester, Spencer Webb, Ryan Webb; sixteen great-grandchildren, seven great-great-grandchildren, former patients and long-time friends. The family invites the public to show their respect and share their memories during visitation hours on Wednesday May 11, 2022 from 4:00 to 6:30pm. A celebration of Gloria’s life will be held on Thursday May 12, 2022 at 1:00pm at the DeArman-Clark Funeral Home in Tishomingo, Chaplin Dave Barger of Guardian Hospice is officiating. Honorary pallbearers are her grandsons Robert Webb, Bryan Webb, Jeremy Webb, Nathan Webb, Edmond Rester, and Johnathan Rester.

Gloria Lee (Lord) Webb A resident of Tishomingo since 1961, Gloria Webb passed away in her sleep at her daughter Dorine&#8217;s home in Tishomingo on Thursday May 5, 2022 at the age of 90 years, 5 months, and 1 day. Gloria was born in Oklahoma... View Obituary & Service Information

The family of Gloria Lee Webb created this Life Tributes page to make it easy to share your memories.

Gloria Lee (Lord) Webb
A resident of Tishomingo since 1961, Gloria...