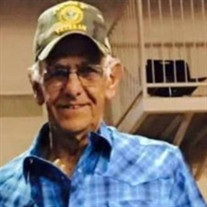 Glenn David Trammell, 71, passed from this life on Thursday, October 22, 2020 in Coleman, Oklahoma. David was born on October 30, 1948 in Sulphur, Oklahoma to Glenn and Perlene Pitman Trammell. David was a graduate from Mill Creek High School and has spent all of his life calling Johnston County home. He married the love of his life, Verna Lee Davis on January 11, 1979. He proudly served our country in the United States Army from 1968-1974. A hard working, dedicated and committed man who has spent the past 42 years working at Mill Creek Dolomite. David was so full of life and had the sweetest soul you have ever met; if you saw David you know you would never see him without a smile. He loved tinkering around on cars and being with his family but they would tell you that what he loved most, was being a part of the Milburn Fire Department from where he spent many, many years until his retirement as Fire Chief. He was thankful of the years he got to serve and the relationships that he built and was even more proud to get to be Milburn Fire Department Badge #329; one who will greatly missed. David is preceded in death by his parents, Glenn and Perlene Trammell; son, Michael Scott Trammell; sister, Charlene Trammell. Those he leaves to cherish his memories are his wife, Verna Trammell; daughters, Kristi Manners and husband David, Ann Owens; grandchildren, Ryan Manners, Matthew Manners, Marley Owens, Corgan Bryant; nieces, nephews and friends. Funeral services to honor and celebrate the life of David will be held at 10:00 AM, Saturday, October 31, 2020 at Calvary Baptist Church in Tishomingo, Oklahoma. Interment to follow at Condon Grove Cemetery. Family hour will be Thursday, October 29, from 6:00 – 8:00 PM at DeArman-Clark Funeral Home. Those serving as pallbearers for the service will be Rodney Gray, Keith Cheesman, Casey Moore, Shawn Moore, Terry Smith and Jon Smith. Honorary pallbearers will be Ryan Manners, Matthew Manners, David Manners, Jarrod Baugh and the Milburn Fire Department.

Glenn David Trammell, 71, passed from this life on Thursday, October 22, 2020 in Coleman, Oklahoma. David was born on October 30, 1948 in Sulphur, Oklahoma to Glenn and Perlene Pitman Trammell. David was a graduate from Mill Creek High School... View Obituary & Service Information

The family of Glenn David Trammell created this Life Tributes page to make it easy to share your memories.

Glenn David Trammell, 71, passed from this life on Thursday,...