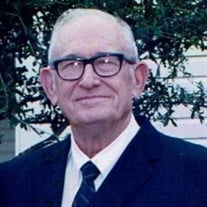 Ed Wilburn Gene Edward Wilburn (Ed or Eddie) was born November 12, 1931, to Marie and Haskel Wilburn. He had one brother, Joe Allen Wilburn, who predeceased him. Ed was born west of Ada, ¼ mile from Sandy Creek, in Pontotac County. He started first grade at Latta, Oklahoma, which was a consolidated school district south of Ada. The family moved, and Ed attended Horace Mann Elementary in Okmulgee for the rest of his first-grade year through the fourth grade. His family then moved to Roswell, New Mexico, where he attended fifth grade. True Oklahomans at heart, the family moved back, and Ed went to sixth and seventh grade in Okmulgee. In the eighth grade, the family moved to Wynnewood, where he attended school until he graduated high school. During the time he was growing up, his dad, Hack, ranched and owned a café in downtown Wynnewood. His mother, Marie, taught school. Marie began her 34-year teaching career teaching at a one-room school house called New Hope where Eddie used to open up the building every morning for her and, in the winter, had the fire going by the time everybody else showed up for school. Between working at the café and taking care of cattle, Eddie played football for Wynnewood High School. He earned the attention of many college scouts, and received a scholarship to play for Texas Christian University in Fort Worth, Texas. That is where Ed met the love of his life, Mary Louise Zelsman. They both graduated from TCU in 1953, and then married on October 12, 1953, in Amarillo, Texas, where Mary Louise was from. Ed worked for Golden Gate Dairy, Swift Ice Cream, Container Corporation, and Gulf States Container Company. Mary Louise was a homemaker and a school teacher. They raised two children, Marcia Wilburn Penland and Robert Haskel Wilburn. Mary and Ed were always on the go. They lived in Big Spring, Waco, and Fort Worth, Texas. They also lived in Whittier and Cupertino, California. Ed was always the one in charge, wherever he went. He started out as a salesman, but wound up as a plant manager and ultimately as the general manager of the places where he worked. When he finally retired, he consulted for a printing company in Houston. During this same time, he and Mary moved to Wynnewood where they began ranching. That was what Ed enjoyed the most. After an accident in January, Ed and Mary moved back to Texas to be closer to family, but he always longed for and planned to return home to Oklahoma. Ed was always an immoveable force who his family called “the flow”. They all just went with “the flow”. Mary was the wind beneath his wings, and he could do anything with her at his side. They shared the most beautiful love story ever written. Ed had many friends, and he loved his family better than life itself. His kids always said he was their rock. He would do anything for them, and they could always depend on Dad. Dad encouraged them, motivated them, and he always believed in them. He lived a life of integrity, honor, hard work, kindness, and generosity. He was a Christian, and after he could no longer go to church, he and Mary watched church on TV every Sunday. Ed was raised a Methodist, but once he married, Mary let him know he now and forever would be a Presbyterian. They were charter members of Saint Paul Presbyterian Church in Fort Worth, Texas, members of Central Presbyterian Church in Waco, and finally, members of First Presbyterian Church in Pauls Valley. Many of Ed’s good friends went to heaven before him, but he leaves behind him here on earth Mary, his wife of almost 67 years, a daughter Marcia Penland, her husband Pat Penland, a son Bob Wilburn, his wife Sara Wilburn, grandchildren Andrew Penland, Gracie Wilburn, and Cooper Wilburn, and life-long good friend Edward Nelms. Ed worked hard and paved the way for so many of us. Ed passed from this early life on May 31st, 2020. He will always be loved and admired beyond measure by those who knew him, but most especially, by his family. He is finally in perfect health again and maybe can take things a little easier now that he’s in heaven. Taking it easy, though, is kind of doubtful. Dad is a mover and shaker. However, we know he will always be looking down on us, loving and guiding us in everything we do.

Ed Wilburn Gene Edward Wilburn (Ed or Eddie) was born November 12, 1931, to Marie and Haskel Wilburn. He had one brother, Joe Allen Wilburn, who predeceased him. Ed was born west of Ada, ¼ mile from Sandy Creek, in Pontotac County. He started... View Obituary & Service Information

The family of Gene Edward Wilburn created this Life Tributes page to make it easy to share your memories.