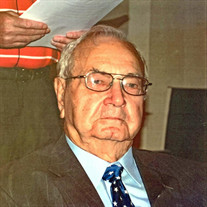 Joe Eugene "Gene" Neal , a resident of Sulphur was born November 19, 1924 in Sulphur, OK to Harce & Annabelle (Elliston) Neal. He passed away Friday September 11, 2020 at Sulphur, OK at the age of 95 years 9 months and 22 days. He was married to Anita J. (Holder) Neal at Sulphur,OK on June 8, 1951. Gene had lived in this area most of his life, where he graduated from Sulphur High School. Gene served in the US Army-Air Corp as a nose gunner in the South Pacific during WW11. Gene had worked as a park ranger for the National Park Service until his retirement. He was a member and deacon of Crossway Baptist Church since 1972 He was preceded in death by his parents and a sister: Ludene West. Survived by his Wife: Anita Neal, of the home Sons & their wife: Lanny Neal & Debbie, of Okla. City, OK Terry Neal & Lisa, of Sulphur, OK 7 Grandchlldren & spouses: Matt Neal, Megan Bowering & Hunter, Marcus Neal & Meagan, McKenzie Neal, Chelsea Neal, Caleb Neal & Brooklyn, Carleigh Tyler & Houston 4 Great Grandchildren Pallbearers will be Matt Neal, Marcus Neal, Caleb Neal, Hunter Bowering, Houston Tyler, and Ryan Heim. Military Service by the US Air Force Honors Teanm Services will be held Tuesday September 15, 2020 at 2:00PM at Crossway Baptist Church officiated by Rev Bill Leveridge.. Burial will be at Oaklawn Cemetery under the direction of DeArman Funeral Home online condolences may be sent to www.dearmanfuneralhome.com

The family of Gene Neal created this Life Tributes page to make it easy to share your memories.