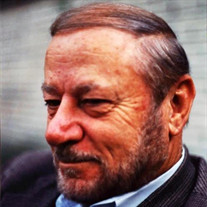 Francis “Frank” Emmanuel Sanzalone ended his earthly adventure on February 8, 2022, ninety years and one day after it started. He was a fearless adventurer, always happiest on the road. He was honorably discharged from the Air Force in 1954, having served four years active duty. His service took him to Spokane, Roswell, and Japan. Following discharge from the Air Force, Frank continued his education at Spartan School of Aeronautics in Tulsa, OK. He met a girl, fell in love and started the first of his three families. He became an electronics engineer by training and applied those skills every day for the rest of his life. Following his discharge from the military, Frank took a position at Douglas Aircraft. He worked on the flight line, but also owned a television shop. His family had the first color television and the finest stereo systems for the time. In the 1960’s, he moved his family to Kwajalein and was part of a flight crew flying reconnaissance in the anti-ballistic missile program. When the Cold War ended, Douglas closed its plant. Frank was an amazingly resilient man and reinvented himself. He always worked hard and never asked anyone for help. In the 1970’s, he went to work as a maintenance man at a local apartment complex, then acquired a real estate license. He later became a real estate broker, partnering in commercial and business real estate. He eventually started his own business selling single family homes and building houses. The recession in the 1980’s found him selling cars. Frank married his wife Linda on March 17, 1983 in Sulphur Oklahoma. In 1993 they moved to Wynnewood Oklahoma, where he remained until his passing. Frank loved family life. He loved children, family gatherings, noisy discussions around the dinner table, unannounced guests and, of course, happy hour. Happy hour was not for drinking, but for socializing. He had a great vocabulary and excelled at Scrabble and Crossword puzzles. He was a master storyteller and had a great sense of humor. His joke telling was legendary. He had such a personality that one never forgets having met Frank Sanzolone. He loved people, was gregarious and was willing to give anyone a chance. He was generous to anyone in need. Dad’s personality was larger than life. All Frank’s children, grandchildren and greatgrandchildren are connected, engaged and love one another. Frank is survived by his wife, Linda Sanzalone, and his children, Robyn Sanzalone (Dan Tanner), Marta Sanzalone, Tony Sanzalone (Jaime), Reva Burton and Kristi Heckman (Ray); his grandchildren: Jonathan and Jessie Tanner, Braden, Kaylee, Lexi and Eli Sanzalone, Tiffinie Hacker (Nathan), Todd Davis, Kamitia Blackburn (Chance), Sara Hughes and thirteen great grandchildren: Service will be held at Oaklawn cemetery on February 12, 2022 at 1:00 pm, and visitation will be Friday February 11, 2022 from 5-7 here at DeArman Funeral Home n Wynnewood, Oklahoma.

Francis &#8220;Frank&#8221; Emmanuel Sanzalone ended his earthly adventure on February 8, 2022, ninety years and one day after it started. He was a fearless adventurer, always happiest on the road. He was honorably discharged from the Air... View Obituary & Service Information

The family of Frank E. Sanzalone created this Life Tributes page to make it easy to share your memories.