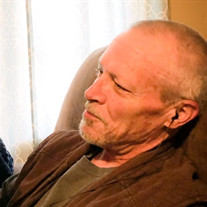 Forrest Albert Williams left us to be with his Lord and Savior on Sunday, August 25, 2019 at the age of 63. Forrest was born to parents Billy Ray & Lovella “Peggy” Williams on January 4, 1956 in Oklahoma City, OK. He grew up as the middle child of three and attended Roff High School, then East Central University in Ada. He served at the Edmond Fire Department before he began his career in Law Enforcement. In 1983 he joined the Department of Public Safety, Capitol Patrol Division. 5 years later, Forrest was accepted to the Dallas Police Academy. He moved to Dallas in 1988 and married Tamberly Trudgeon. Lauren Nicole Williams was welcomed to their family on March 9, 1990. While with the Dallas Police Department, Forrest earned many commendations for his expertise in Tactical Shooting. His service led him to meet and teamed up with a firearms importer and open a retail gun store. He delighted in sharing his extensive knowledge with his many loyal and adoring customers, while continuing to serve the city of Dallas. In 1997, the family then moved to Sweetwater, Texas where Forrest served as Deputy Sheriff in Nolan County for 3 years. On August 29, 1997, Gunnar Kean Williams was born. As Forrest’s desire to return to Oklahoma grew, the decision was made to move his family home in 2000. Although the couple divorced in 2002, they remained the best of friends and continued to raise their children in Oklahoma. Over the next several years, Forrest was employed at the Murray County Sheriffs Office before moving to Moore where he was General Manager in the Restaurant Industry. He then pursued his dream of self-employment and opened a Retail Store in Yukon, Oklahoma. He poured his heart and soul into his business until his health declined a short time later. Forrest loved nothing more than his Shnookums and Gunslinger with whom he shared his passion for reading, movies, guns, shooting and collecting knives. His life will forever be cherished in the lives of his daughter, Lauren Nicole Williams; his son, Gunnar Kean Williams; parents, Billy Ray & Peggy Williams: his sister, Cynthia Walkowski; his brother, Mark Williams; and one grandson, Connor Allen McDonald. Memorial Services will be held Saturday September 14, 2019 at 11:00AM at DeArman's Funeral Chapel officiated by Rev Kerry Freeman arrangements by DeArman Funeral Home of Sulphur. Online condolences may be sent to www.dearmanfuneralhome.com

The family of Forrest Albert Williams created this Life Tributes page to make it easy to share your memories.

Forrest Albert Williams left us to be with his Lord and Savior...