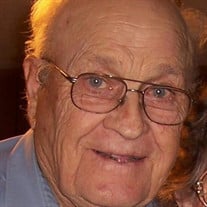 Floyd Morris Campbell, longtime Wynnewood resident, passed away November 26, 2021, in Stillwater. He was born in February 20, 1923 near Red Oak, OK, the 4th of 6 children to Bonnie Bell (Real) and George Oscar Campbell. Traditionally his family celebrated his birthday on February 19, although his birth certificate stated February 2. During the harsh economic times of the Great Depression, Floyd’s family moved frequently. He started school at Ashland, but also attended school at Chigley, Joy, Mexican Springs, and finally Wynnewood. During his teenage years, he took time away from school to earn money doing miscellaneous farm work. He and Ruth Scott were married October 3, 1942. Floyd was 19 with a year of school remaining while Ruth was 20 and a high school graduate. During his senior year, rather than riding the school bus, Floyd drove the bus. In May and June of 1943, he had three major life events: he became the first in his immediate family to graduate from high school at 20 years of age; he became a father with the birth of his and Ruth’s first child Floyd Douglas; and he entered the US Army. Floyd and Ruth were eventually blessed with three more children: twins Elizabeth and Frederick, and David. Floyd served in the Army Air Force from June 1943 until November 1945. Starting as a pilot cadet, he eventually became a radio operator and aerial gunner assigned to a B-24 crew. Training stops included Wichita Falls, TX; Sherman, TX; Sioux Falls, SD; Yuma, AZ; and finally Tonopah, NV. Duty stations included Nadzab Airfield, New Guinea; Morotai, Dutch East Indies; and Clark Airfield, Philippines. At Morotai, Floyd was assigned to the 372nd Bomb Squadron, 307th Bomb Group (Heavy), of the 13th Air Force. At war’s end, he witnessed the formal surrender of Japanese forces on Morotai. For his service he was awarded the Asiatic Pacific Campaign medal with three campaign stars, the Philippine Liberation medal, the Good Conduct medal, the Sharpshooter badge with Pistol bar, and Aerial Gunner wings. He left the Army Air Force at the rank of Sergeant. Following Floyd’s military service, he used his GI benefits to attend college, first at Cameron College then Oklahoma A&M. He earned a BS in Agricultural Education in January 1949 and began teaching high school agriculture in Hagerman, NM. Floyd and Ruth returned to the Wynnewood area in 1951 and farmed briefly in the Joy community before settling on their farm north of town. For a number of years, Floyd supplemented his farm and ranch income working at the Kerr-McGee refinery. He continued raising cattle until moving into assisted living in 2013. After the death of their daughter and son-in-law, Elizabeth and Deon Ammons, Floyd and Ruth assumed the responsibility and joy of a second family, nurturing grandchildren Christy and John as their own. Floyd was a longtime member of the First Baptist Church of Wynnewood, serving as a Sunday School teacher, deacon, and treasurer. The greatest joys of his life were his faith in Jesus Christ and the love he shared with his family. Floyd was preceded in death by his parents, his wife Ruth, sons Floyd Douglas and Frederick Campbell; daughter Elizabeth Ammons; grandsons Eric Campbell and John Ammons; brothers Bernie and George Oscar, Jr.; also sisters Juanita, Fern, and Lorene. He is survived by son and daughter-in-law David and Debbie Campbell of Stillwater; daughter-in-law Doris Campbell of Katie, TX; grandsons Shannon, Noel, and Ryan Campbell; granddaughter Christy Wheeler; 9 great grandchildren; one great-great grandchild, and a host of nieces and nephews. Services will be held at 2:00 pm, Thursday, December 2, 2021, at the First Baptist Church of Wynnewood. Burial will follow at Oaklawn Cemetery.

The family of Floyd M Campbell created this Life Tributes page to make it easy to share your memories.