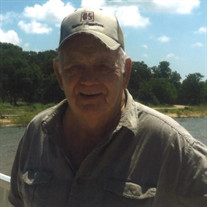 Emanuel Richard Vandevier was born on March 10, 1939 to Elijah Mark and Olie Vandevier and was welcomed into his heavenly home with Jesus on December 4, 2020. At 81 years of age, Richard had lived a full and productive life and was a man of great faith, strong morals and high character. He rarely met a stranger and set an example to his children of what it meant to live a charitable life never holding too tightly to anything and always looking for ways to be a blessing to others. He knew the true meaning of Proverbs 22:1 “A good name is to be chosen rather than great riches, Loving favor rather than silver and gold.” Richard was raised on a dairy farm in Bullard Chapel, attended Bullard Chapel School and later graduated from Tishomingo High School in 1957. His senior year he earned State and American Farmer Degrees in FFA, an accomplishment he was incredibly proud of. By the age of 20, he was a father and was helping his dad run the family farm. He was also a member of the local National Guard Unit, a deacon at the First Baptist Church and was entertaining the idea of attending college to become a veterinarian. A pivotal moment occurred in Richard’s life when at the age of 22 he lost his beloved father, after a very short illness. This affected him greatly and he often told his family that he was lost without his best friend. He never stopped missing his dad and mentioned many times that he wished he could just ask him for advice on life’s many situations. After his dad passed, Richard opted to keep the family dairy farm running and found milking cows to be hard but rewarding work and he was happy to put his hand to it. At the age of 25, he rode the train to Chicago so he could attend the Curtis Breeding School for two weeks. During the following years he used that knowledge to help area ranchers develop their herds through use of artificial insemination. Additionally, he walked a mail route for many years, studied to become an abstractor and built a successful abstract company in Tishomingo. He obtained a real estate license, sold insurance, traveled, attended conferences and took a wide variety of courses in an effort to be as educated as possible. For years he worked side by side with his son not only in farming but also in service to the community at Southern Select Feeds. He referred to his chair at the feed store as his happy place and he could always be found talking or napping there, especially on a warm sunny day. Richard served on the Tishomingo School Board for many years, as well as the Johnston County Election Board and he, along with several others, helped build the Bullard Chapel Baptist Church. He always had a song to whistle or sing, a joke to tell and a smile to pass along. His deep faith held him steady through good times and hard times and he learned from his mother to look to God for help, to sing sweet hymns and to look at the clouds and long for the day he would see beyond the veil. He found joy in the simplest of things and kept a childlike innocence about him, even to the end. He was deeply loved by his four children and was without a doubt one of the kindest men you would ever meet. Richard was preceded in death by his parents, one brother G.W. Vandevier, two half-sisters Elizabeth Ruth and Melvina Alderson and one half-brother Carl Leslie. He is survived by his children, Janet Beaver and husband John of Tishomingo, Mark Vandevier and wife Dee of Coleman, Mike Vandevier and Liz Elliott of Tishomingo and Jayne Sconyers and husband Michael of Ada; one sister Marie Jackson of Kenefic; eight grandchildren and ten great-grandchildren. Richard will be greatly missed by a host of family members and friends but his legacy will be deep and long lasting.

Emanuel Richard Vandevier was born on March 10, 1939 to Elijah Mark and Olie Vandevier and was welcomed into his heavenly home with Jesus on December 4, 2020. At 81 years of age, Richard had lived a full and productive life and was a man... View Obituary & Service Information

The family of Emanuel Richard Vandevier created this Life Tributes page to make it easy to share your memories.