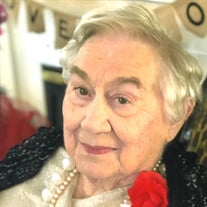 Eileen Underwood departed this life January 15, 2021 at Alliance Health in Durant Ok at the age of 88 years. Eileen Mary (Hruska) Underwood was born August 13,1932 to Joe E. and Georgina (Ptak) Hruska in Tabor, South Dakota. She graduated from Tabor High School and upon graduation she was accepted into school of nursing at Creighton. Eileen worked as a Public Health Nurse for many years. She was of Catholic faith. Eileen loved music, reading books and baking. She had many fond memories of dancing at the Czech Day Festival in Tabor with her brother Marvin. Eileen married Jerry N. Underwood January 28, 1974. After living in various places, they settled in Milburn, Oklahoma where they spent many happy times with the Girl Scouts and Chickasaw Culture. They enjoyed hiking, fishing, camping and viewing nature. Eileen often laughed with Jerry as he teased her about going to Judy's bar and having a rowdy time (which she never did!) After Jerry's death in 2019 she later moved to Featherstone Assisted Living in Durant, Oklahoma. There she won Valentine Sweetheart and made numerous friends. Her afternoon treat was Danny and Weston bringing her ice cream from Braums. One day they tried to sneak in Sonic ice cream but she looked at Danny and said " This is not Braums"! So that was the end of Sonic!! Eileen is survived by her brother Marvin and wife Cathy of Sturgis, South Dakota, brother-in-law Charles and wife Oneita of Colorado, sister-in-law Judi Underwood of Wynnewood, Oklahoma, five nieces and one nephew. Also, her adopted family Danny, Wyllene and Weston Holland of Wapanucka, Oklahoma, as well as Jason, Debbie and Olivia Wade of Coleman Oklahoma. Preceded in death by her parents, grandparents, beloved husband and special Aunt Tillie, with various other family members, friends and neighbors. A graveside service will be held at 2:00 PM on Tuesday, January 19, 2021 at the Troy cemetery in Troy, Oklahoma. Those serving as pallbearers for the service will be Cecil Underwood, Joe Hruska, Jason Underwood, Danny Holland, Weston Holland, Jason Wade. Honorary pallbearers Mike Green, mark Green, Dennis Voyles, David Underwood. In lieu of flowers, the family has asked that donations be made to the Catholic Foundation of Oklahoma, 7501 Northwest Expressway, Oklahoma City, Oklahoma 73132 (405-721-4115)

The family of Eileen Mary Underwood created this Life Tributes page to make it easy to share your memories.