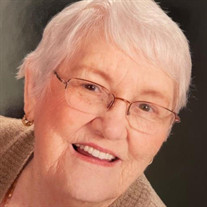 Edith Delene Raymo was born in Fulton, Mississippi to the late Jerdie and Ethel (Thornton) Franks on June 13, 1925. She passed away on December 21, 2021 at the Arbuckle Memorial Hospital in Sulphur, OK at the age of 96. She graduated from Wolfe City High School in Wolfe City, TX in 1943. Edith married Robert (Bob) William Raymo, on December 26, 1945 in Greenville, TX. They were married for 72 years when Bob passed away in 2018. After they were married, they moved to Syracuse, NY where they were blessed with four children. In 1963 they were transferred to Oklahoma City. Edith worked in the accounting department at General Electric Co. and in 1969 she began working at Putnam City West High School as their financial secretary. In 1974 Bob and Edith retired and built their home at the Lake of the Arbuckles, where Edith resided until her death. Her children and grandchildren have the fondest memories of visiting with their Grandma and Grandpa at the lake boating, skiing and enjoying her amazing cooking. She never tired of serving others. Edith was a talented artist and she and Bob were very active with the Artists of the Arbuckles as well as with the community of Sulphur. Edith was a member of Crossway Baptist Church and loved the Lord with all her heart. She was known as the sweetest and kindest person by everyone she met – a real jewel. She saw the best in everyone. Though her health was failing she rarely complained. She loved her family and kept up with her children, grandchildren, relatives and friends on Face Book. She made great efforts to know the wellbeing of family and friends so she could pray for their needs. When she was with her family her heart was full. She will leave a legacy of love and devotion to her Lord, family and friends that will remain with us forever. She was preceded in death by her parents, daughter: Deborah Raymo Shepherd, her husband Bob, brothers: Edward, Warren and James Franks, Sister: Eva Franks Bennett. Survived by her Brother Joe Franks and wife Toni of Dallas Son : Gary Raymo and wife Darla of Sulphur, Daughters: Delene Abbott, of Cassville, MO, Linda McDonald and husband Kenny of Okla. City, Son-in-law: Shan Shepherd and wife DeAnn Grandchildren: Michelle and Misty McCasland , Jaime Shepherd Trendle, Galya Raymo McClure, Melissa McDonald Beale, Ryan Raymo, Kyle McDonald, Kimberly Shepherd Moates, Stephen Shepherd IV. Great Grandchildren: Reese and Alicen Johnson, Katelyn Kvamso, Aubrey Rusher, Chaise and Addie Trendle, Mady and Maci McClure, Katie Beth and Brayson Beale, Launa and Hayden Raymo, Kaden and Lucas McDonald, Eleanore, Madeline, Catherine and Caroline Moates, Stevie, Jackson and Nolan Shepherd. Pallbearers: Grandsons Ryan Raymo, Kyle McDonald, and Stephen Shepherd IV Great Grandsons Reese Johnson, Kaden McDonald, and Hayden Raymo Services will be held December 27, 2021 at 10:00 am at Crossway Baptist Church officiated by Rev Bill Leveridge.. Burial will be at Resurrection Memorial Cemetery in Oklahoma City under the direction of DeArman Funeral Home online condolences may be sent to www.dearmanfuneralhome.com

Edith Delene Raymo was born in Fulton, Mississippi to the late Jerdie and Ethel (Thornton) Franks on June 13, 1925. She passed away on December 21, 2021 at the Arbuckle Memorial Hospital in Sulphur, OK at the age of 96. She graduated from... View Obituary & Service Information

The family of Edith Delene Raymo created this Life Tributes page to make it easy to share your memories.

Edith Delene Raymo was born in Fulton, Mississippi to the late...