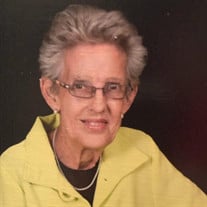 Delores Jayne Muse 05/10/42 – 02/08/2021 Born and raised in Southwest Oklahoma on a small family farm. Married Charles Muse January 16, 1960 in Floyada, Texas, and had two sons. They moved to Tishomingo in the fall of 1970, where she lived up to her passing. She succumbed to multiple ailments including COPD, asthma, allergies, cirrhosis of the liver, COVID, pneumonia and ultimately heart disease. Daughter of Joseph Pearl Seabolt, and Glenna Irene Seabolt, she was a Strong woman before it was popular. Growing up on the farm during tough times, having asthma and multiple allergies, she had to be physically tough. Raising my brother and I undoubtedly made her a strong mother, had to. Delores worked at Murray State college in the business office before establishing the first Day Care Center at the college. After Dad’s passing in 1982, she embarked into the political arena, running for County Clerk, and holding that position for the next 19 years, making her a mentally tough business person. She never demanded accolades and leadership but as they say, some are born into leadership, some have it thrust upon them, but she just stepped up and did it. After retiring, she never retired. Her volunteerism which she readily gave goes way back in years, and is an example of the way it should be. She always told us that no matter how little we had, there was always someone in worse shape. Delores gave her time willingly to the Methodist Church, Eastern Star, the Rose Petal, the county fair, multiple mentorships which she truly loved. Helping out anyone, but mostly women, we have multiple stories of her generosity which earned her Johnston County Volunteer of the year. It seemed that every volunteer event turned into some leadership role. A giver does not adequately describe this Angel. All you had to do was ask or be around her long enough to get to know her. If she knew you were coming, she would make your favorite snack or meal, just because it made you happy. She was a diehard Sooner! She kept buying season tickets, not for herself but for family and friends, just because it made you happy. A strong family woman. Her loves: God, family, The Church, Eastern Star, Johnston County, Tishomingo, and her big one helping others. She is survived by a sister, Carolyn and her husband James McElroy of Ardmore, son Alan of Indianapolis, Indiana, son Jacky of Edmond Oklahoma, 9 Grandchildren, 6 Great Grandchildren, nephew Todd McElroy of Abu Dhabi, and niece Melanie Backburn of Ardmore. Mom we love you and miss you. You have set the bar high for any to follow. You may have been small physically but you are a giant in every other way. I can only hope to have half the heart you do. Pallbearers: Ronnie Coppedge, Tom Lokey, Mike Thompson, Tyler Blackburn, Dylan Muse, Dwain Teel. Funeral Services for Delores Jayne Muse will be held on Friday, February 12, 2021 at the First United Methodist Church. The family request due to COVID that the services be private.

The family of Delores Jayne Muse created this Life Tributes page to make it easy to share your memories.