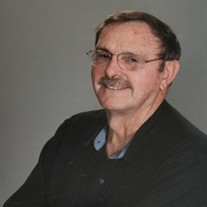 Delbert Bruce Gray, 75, of Tishomingo, passed from this life on December 30, 2020 at the Chickasaw Nation Medical Center in Ada, Oklahoma with his loving wife and children by his side. Delbert was born on June 23, 1945 in Akron, Arkansas to Oscar Douglas and Lilly Mae (Malone) Gray. His work ethic and desire to take care of his family led to him enlist in the Navy at the age of 17. Delbert was a veteran of the Vietnam War. He served aboard the USS Bon Homme Richard in the south China Sea of Vietnam. He was in the VF191 Fighter Squadron. For his service, he earned both the Vietnam Service Medal and National Defense Medal. He served honorably in the Navy, achieving the rank of 3rd Class Petty Officer. Delbert’s experience in the Navy played a very important role in his life. He frequently pointed out that the Navy taught him the value of discipline, teamwork, and investing in a cause larger than himself. He would often explain to loved ones how these values contributed to his success in life and thought every young person should join the military. Post Vietnam, he worked both in the oilfield industry and as a heavy equipment operator before changing careers working in construction for residential and commercial businesses. Delbert loved tinkering and fixing just about anything, if it didn’t run he accepted it as a challenge and you could bet he would fix it. Delbert had a servant’s heart; he went on several mission trips and served as part of the Oklahoma Baptist Disaster Relief teams that went out after the hurricanes in Florida and Texas. He was a member of the Christian Motorcycle Association and for several years was the road captain. He cherished the time spent on the road with this group. Delbert was notably active over the years in his church, the VFW, the Johnston County Veterans Group, the Johnston County War Memorial, and served as a volunteer with INCA/Americorps-Seniors. God, family and his country, are the three things he cherished and was very proud and passionate about. Delbert was loved by all who knew him, and he will be remembered as a man for whom honor and respect had great meaning. If you saw Delbert coming, you knew you were going to see a smile because he never went anywhere without one. His smile, humor, and big heart will be remembered by all who had the privilege to share in his life. If you asked a hundred people who Delbert Gray was, they may all give you a different story but they would all contain one common thread. He was a good man. Delbert lived life to the fullest every day and although he left this earthly home, we know he is cruising the streets of gold on his Harley and looking for a coffee shop to tell stories at. Delbert is preceded in death by his parents, Oscar and Lilly Gray; son, Russell Gray; 5 brothers, Doug, Billy Gene, William, Vernon, Richard. Those he leaves to cherish his memories are his loving wife of 56 years, Doris Jean Henderson Gray; children,Rebecca Shiplett and husband Freddie of Midwest City OK, and Rodney Gray and wife Wanda of Tishomingo; grandchildren, Lynsie Zona, Ryan Baskin, Devon Shiplett, Tiffany Green, Brandon Shiplett, Kara Holcomb, Taylor Matthews, Colby Gray, Garrett Beardmore, Brandy Updegraff, and Collin Sullivan; 31 great grandchildren; siblings, Virgil Gray, Wanda Gillian, Louis Gray, Shirley Danley, Bobby Gray, Barbara Graham, Donny Joe Gray and a host of other relatives and friends. Funeral Services to honor and celebrate the life of Delbert Bruce Gray will be held at 2:00 PM on Monday, January 4, 2021 at Calvary Baptist Church in Tishomingo, Oklahoma. Interment to follow at Condon Grove Cemetery in Milburn. Family hour will be held from 4:00 - 6:00 PM.

Delbert Bruce Gray, 75, of Tishomingo, passed from this life on December 30, 2020 at the Chickasaw Nation Medical Center in Ada, Oklahoma with his loving wife and children by his side. Delbert was born on June 23, 1945 in Akron, Arkansas to... View Obituary & Service Information

The family of Delbert Bruce Gray created this Life Tributes page to make it easy to share your memories.

Delbert Bruce Gray, 75, of Tishomingo, passed from this life...