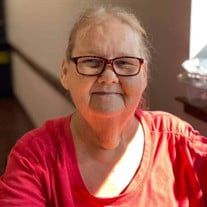 Deborah Renee O’Neal, 68, passed away on Thursday, March 31, 2022 in Oklahoma City, Oklahoma. Deborah was born on April 26, 1953 in Kingsville, Texas to Darrell and Lena (Richardson) Cagle. She spent her years growing up in Anchorage, Alaska and then later moved to Hawaii and then Texas before moving to Tishomingo in 1993 where she spent the rest of her life. When Deborah was in Texas, she ran a home for battered women in Corsicana. She loved her plants and had a green thumb. Deborah enjoyed caring for others; she was humble, selfless, nurturing; she was everyone’s “Momo”. Over the years she has raised and cared for some many people and kids without ever wanting anything in return. A true servant, caregiver, with a heart of gold and a love for people who will be greatly missed by all the lives she touched. Deborah is preceded in death by her parents, Darrell and Lena Cagle. Those she leaves to cherish her memories are her sons, Ralph Cooper III, Aaron Cooper and wife Leslie Smith, and Micah Ikeda; daughters, Patricia Berry and husband Tommy, Glory Cooper and husband Justin Smith and Danielle Hamilton and husband Dale; 15 grandchildren and several great grandchildren; brothers, Danny Cagle and wife Karen and Jimmy Cagle; sisters, Sue Rose, Vicki Stephenson, Diane Joplin and Betty Hendricks and a host of other family and friends. Funeral services will be held at 11:00 AM on Tuesday, April 5, 2022 at DeArman-Clark Funeral Home Chapel with Pastor David Boggs to officiate. Interment to follow at Condon Grove Cemetery in Milburn. Family hour will be Monday, April 4 from 5:00 – 7:00 PM. Those serving as pallbearers will be Micah Ikeda, Aaron Cooper, Chris Vaughn, Jacob Armstrong, Nathan Easley and Dale Hamilton.

Deborah Renee O&#8217;Neal, 68, passed away on Thursday, March 31, 2022 in Oklahoma City, Oklahoma. Deborah was born on April 26, 1953 in Kingsville, Texas to Darrell and Lena (Richardson) Cagle. She spent her years growing up in Anchorage,... View Obituary & Service Information

The family of Deborah Renee O'Neal created this Life Tributes page to make it easy to share your memories.