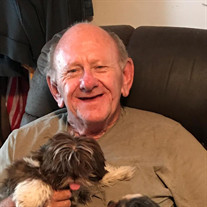 David “Dave” Wayne Tullos, 76 (39 if you ever asked him), of Tishomingo, OK passed away on June 6, 2021 due to complications of pneumonia. Dave was born December 30, 1944 in Nacogdoches, TX to the late Elbert Ivy and Mildred Tullos. He had one sister, Barbara, and one brother, Billy. He married Brenda Kay, the love of his life, September 1, 1982 in Greenville, TX. After moving around Texas and Wyoming, he settled in Tishomingo, OK in 1991. He spent most of his life as a diesel mechanic by trade but he was a man of many hats that could do it all. He enjoyed hunting, fishing, camping, tinkering with anything that had a motor, and spending time with his family and animals. He enjoyed watching war movies and old westerns. Dave loved spending his time with children and liked to make them laugh by wiggling his ears. Dave never met a stranger and was a friend to all. Dave is survived by his children: Lennie and husband Wesley Richardson, Davida Hardee, and Gary Braziel; grandchildren: Amber Hardee, Brian Tullos, Alicia Hardee, Melanie Allen, Stormie Richardson, Robert Hardee, Madison Braziel, Gabriale Braziel; many great-grandchildren and extended family members. He is preceded in death by his spouse; Brenda Kay Tullos, January 27, 2019, his daughter; Lola Darlene Tullos, May 7, 2005, his son; Gerald Wayne Braziel, May 9, 2018; his granddaughter; Gracie Bren Braziel, April 3, 2015. The service will be held June 11, 2021 at 2 p.m. at DeArman - Clark Funeral Home in Tishomingo, OK. Interment to follow at Tishomingo Cemetery. Visitation will be held Thursday from 5:00 - 7:00 PM.

The family of David Wayne Tullos created this Life Tributes page to make it easy to share your memories.