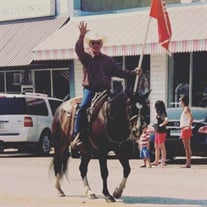 Craig Wyatt Garone, 75, was born June 21,1945 in Bakersfield, California. He was a resident of Bakersfield, California for 50 years and Milburn, Oklahoma for 25 years. He passed away September 8,2020 after a short illness. Craig’s mother was Erma Jo Wyatt Garone and his father was Leo Pasquale Garone. Craig was proud of his pioneer roots. His maternal grandparents Walter and Tommie Wyatt came from Texas to California for a new life, as did his paternal grandfather, Pasquale Garone who came from Italy. Grandfather Garone was a successful farmer and was one of the founders of Greenfield, California. Craig’s father, Leo was also a farmer -- Craig, his sisters Carol, Lynette and brother Tim grew up on the family farm in Greenfield. Craig attended Greenfield Elementary School and South High School. At South, Craig played football, had an outstanding career in track and raised show cattle in 4-H. Craig attended Pasadena Nazarene College for two years and then transferred to Cal Poly University at San Luis Obispo. He was on the rodeo team at Cal Poly. Craig had a brief career in the movie business thanks to his cousin Walter Wyatt. Craig decided living in Los Angeles was not for him, so he came back to Greenfield and started rodeoing. Craig was a lifetime member of the Professional Cowboys Association. He traveled all over the central and western states steer wrestling. Craig was exceptionally proud when pictures of him steer wrestling made the cover of the Bakersfield newspaper, The Bakersfield Californian and the ProRodeo Sports News. Ranching and farming were a big part of Craig’s life. He was proud to live and work on the original Garone homestead in Greenfield. Craig raised cotton, wheat, corn silage, hay and watermelons. His ranch was in the Tehachapi Mountains and Craig said his good days were being on horseback there. He hoped his legacy of the love of horses would be passed on to his grandchildren. Craig mentored many high school boys who wanted to learn how to steer wrestle. He also hauled his team of bull dogging horses to high school rodeos all over California for them. In 1995, Craig moved his family and ranching operations to Milburn, Oklahoma. He loved being involved in his sons’ school sports, 4-H, and FFA. Craig also served his community being on the board of the Tishomingo Hospital. Craig was also one of the first in the area to use rotational grazing and focus on grass-fed beef. He formed a Ranchers group at Victory Life Church in Durant, to bring some of the newest ideas in the cattle industry to the area. Craig was a member of the Oklahoma Cattlemen’s Association. He is survived by his wife of almost 47 years Nellie; daughter Joline Dearmore; sons Tyler and wife Lindsey and Chris and fiancée Sarilyn Logan; sister and brother-in-law Lynette and Richard Lee; brother Tim Garone; grandchildren: Cody, Jade, Sean, Gabriel, Sophia, Jaxton, Kiercy and Korbyn and great grandson Kellan; brother-in-law Jeff Hanger, many, many cousins, nieces and nephews and good friend Mark Gahegan. Craig was predeceased by his son Trevor Wyatt Garone, sister Carol Mahan and parents Leo and Erma Jo Garone. Craig loved God, his family and being a cowboy. His favorite music was Red Stegall and the Bill Gaither Trio. His generosity, kindness, and love will be missed greatly. In lieu of flowers, the family requests donations to Johnston County Reaching Out, P.O. Box 773, Tishomingo, Oklahoma 73460 or Kern County Teen Challenge Men’s Ranch, P.O. Box 1011, Bakersfield, California 93302. Craig was very involved in the beginning of the Men’s Ranch helping to get it organized. A celebration of life will be held, Friday, September 18th at 11am at DeArman-Clark Funeral Home in Tishomingo, Oklahoma. The service will also be live streamed on their Facebook page ( DeArman-Clark Funeral Home) and available on the funeral home’s website (https://www.dearmanfuneralhome.com/) and Facebook page after the service.

The family of Craig Wyatt Garone created this Life Tributes page to make it easy to share your memories.