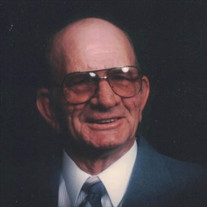 Conrad “Tommy” Mitchell Thompson, Sr., also known as “Connie” to his immediate family, 96, passed peacefully on the morning of March 21, 2022, at his home in Oklahoma City, OK. The son of Robert and Mettie V. Rainbolt Thompson, Conrad Thompson was born near Bullard Chapel on December 9, 1925, -he insisted in a chicken coop. He grew up in Tishomingo, OK, with his seven siblings and graduated from Tishomingo High School in 1940. A proud veteran of the U.S. Navy, he served as a Seaman First Class from 1943 – 1946, in the Pacific theater during WW II. Returning to Oklahoma, he married his first wife, Verlene Colson, in 1946, and they had two children before divorcing. He was happily married to Lorraine Thompson from 1963 until her death in 1995, and gained three much- loved stepsons. Later, he had a 17 year relationship with his companion, Faye Tullous. After returning from his military service, Conrad settled in Oklahoma City. He drove a cab and worked as a dispatcher for a while. In 1957, he joined the U.S. Postal Service and was very active in the Letter Carriers Association union; until he retired after 30 years of service, in 1987. Not one to be idle, Conrad keep himself busy with projects and hobbies, one of which was attending auctions looking for the next great deal. He also faithfully maintained his late wife’s rose garden, and won several neighborhood awards for their beauty. Family was the center of his life and he chose to spend most of his time with them; in Oklahoma City and regularly traveling to visit in Clarita and Tishomingo. Life interrupted his long cherished retirement plan to move to Clarita, to spend more time with his family, his treasured horses, and become a full-time rancher. He loved his cowboy hat, but was most often was found wearing one of the many ball caps in his extensive collection. If he wasn’t wearing his cap, it was within arm’s reach. Conrad was confident, stubborn, self-reliant, and felt most at home on the back of a horse. Had he been born in a prior generation, there is no doubt that Conrad would have been a cowboy, tending his stock and riding the open range. “Oh the last goodbye is the hardest to say, and this is where the cowboy rides away.” --George Strait Conrad is survived by: his brother, Jim Thompson, of Noble, OK; his stepchildren: George Newton and his wife, Janice, of OKC, OK, Charlie Newton and his wife, Lynn, of OKC, OK; his 12 living grandchildren: Constance Thompson Hansel, of Vancover, WA; Timothy Williams, of Shawnee, OK; Jamie Baty, of Edmond, OK; Wes Newton, of OKC, OK; Cari Czajkoski, of Newalla, OK; and Jennifer Santiago, of Edmond, OK; Jaclyn Allen Tiwari, of Denver, CO; Robyn Cates, of Indianapolis, IN; Kimberly McLeod, of OKC, OK; Tammy Hudson, of OKC, OK; Mike McLeod, Sr., of OKC, OK; Kirk McLeod, of Casselberry, FL; 24 great- grandchildren; 12 great-great grandchildren; and many beloved nephews, nieces, and cousins. Conrad was preceded in death by: his parents, Robert Preston and Mattie V. Rainbolt Thompson; his brothers: Robert "Bob" Thompson, Clarence Thompson, and Charles “Punk” Thompson; his sisters: Flora Hairell, Melverda “Jane” Grant, and Bonnie McDowell; his wives: Mable Lorraine Thompson, Lorrance Verlene Colson, and longtime partner Bessie Faye Tullous; his children: Brenda Joyce McLeod, Conrad Thompson, Jr. and step-son Robert Newton; his granddaughter, Catrina Thompson; and great-grandson, Conrad Brooks. A service honoring the life of Conrad Thompson will be held, on Friday March 25, 2022 at 2:00 pm at the DeArman-Clark Funeral Home, 305 E Main St, Tishomingo, OK. Interment to follow at the Tishomingo Cemetery.

The family of Conrad Mitchell Thompson created this Life Tributes page to make it easy to share your memories.