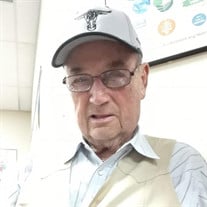 Charles Gayland Townsend, age 81 of Milburn, OK went home Friday November 27,2020. Gayland was born in Arch, NM to Richard and Marjorie Townsend on May 25, 1939. He graduated from Clovis High School. He married Patti Kinsey on July 15,1961 in Reno, NV. Services will be held at Christ Independent Baptist Church in Milburn, with family viewing starting at 11AM and public visitation at 12:30PM and services at 2PM, officiated by Bro. Earl Wyatt. Services are under the direction of DeArman-Clark Funeral Home. Gayland and Patti moved to Albuquerque, NM after their marriage. He, along with his brother owned and operated a drywall business, along with multiple cattle ranches in New Mexico. In1972, after selling the drywall business, the Townsend family moved to one of the ranches in Roswell, NM where they remained until 2004. In 2004, Gayland and Patti moved to Milburn, OK, where they own and operate a registered Brangus cattle ranch. While in Roswell, Gayland was a board member of the soil and water conservation of the Dexter-Hagerman district, in which he was the chairman for many years. He was a board member of the International Brangus Breeders and the Southwest Brangus Breeders Association. He also was one of the founding members of the Roswell Brangus Bull and Female Sale, which will have their 30th annual sale in 2021. While in Milburn, Gayland was on the city council. Gayland was preceded in death by his parents, 3 brothers and 2 sisters. He is survived by his wife, Patti Townsend; 3 sons Philip Townsend of Meade, Ok, Steven Townsend of Milburn, OK, and Charles Townsend and wife Rhonda of Glasgow, KY; 4 grandchildren Cody Townsend and wife Elisa of Clayton, NM, Owen Margaret Kruse and husband Augie of Evansville, IN, C. Oliver Townsend of Washington D.C. and Tyler Townsend of Milburn, Ok., along with 2 great-grandchildren Katelyn and Natalie; his brother Henry Townsend and wife Pat of Ruidoso, NM, and sister Faith Bradley of Fayetteville, AR. Pallbearers are: Cody Townsend, Oliver Townsend, Tyler Townsend, Augie Kruse, Gary West, Dustyn Carpenter. Honorary pallbearers are: Phillip Tate, Bill Morrison, Sammy Pierce, Dewayne Covington, Dr. Paul Weathers, Ivan Richeson, Bob Winn. Memorial can be given to Christ Independent Baptist Church or Caddo Presbyterian Church. The family wishes to thank Dr. Weathers, Urgent Care of Milburn, the LVAD unit of Baylor, Christ Independent Baptist Church, and Caddo Presbyterian Church.

The family of Charles Gayland Townsend created this Life Tributes page to make it easy to share your memories.