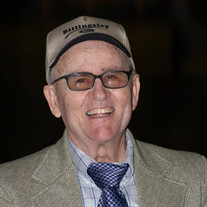 Nobody loved the Lord like Charlie Barnes. On Friday, Jan. 8th, Charlie finally got to see Him. Rev. Charles (Charlie) Herman Barnes was born on January 27, 1933, at the family’s home in Ardmore, Oklahoma. Charlie almost died as an infant until his parents finally found milk he could tolerate – from the neighbor’s goat – and he became quite the healthy eater ever after. Born the youngest of three boys, Charlie’s parents, Watts Dewitt Barnes Sr. and Alice Ione Hopkins Barnes, raised him in the Ardmore Emmanuel Baptist Church, taking the boys “every time the door was open.” The Barnes Family moved from Ardmore to Allen, Oklahoma when Charlie was a young boy. The First Baptist Church of Allen became his church home for the rest of his “growing-up” years. Charlie graduated from Allen High School, then from East Central University, Ada, Oklahoma, in 1956 with a bachelor’s degree in Education. He also attended Southwestern Baptist Theological Seminary in Fort Worth, Texas. Always preaching, Charlie pastored two small-town Baptist churches in Lane and Centrahoma, Oklahoma, before taking the “Southern Baptist theology” up to those “Northern Baptists” in Ohio for several years. He also worked in the Baptist Student Union at East Central University and spent time distributing books for the Seminary in Fort Worth. Charlie found a calling caring for Arthur & Bessie Brown in Artesia, New Mexico, and supported them for many years, before moving to Tishomingo to be closer to family. Here he volunteered diligently with other like-minded church members to provide Bibles and minister to prisoners in jails in and around Tishomingo. Charlie’s last years were spent at the Blue River Health Care facility. As a long-time member of the Bullard Chapel Baptist Church, he attended faithfully until his health deteriorated to the point that he could not attend outside services. However, he continued to attend church services and participated in Bible studies that were held for residents at the facility. He died there at the age of 87. Charlie will be remembered for his powerful prayers, his faith in the triumphal return of Christ, and his love of the Bible. He always had scriptures ready to pass out to anyone who would take them. The best birthday present he ever received was a box of Bibles he could give away. He had few possessions but much love. He was optimistic and happy, eager to help and be of assistance, especially in handyman services that aided those in need. He will be missed. Charlie Barnes was preceded in death by his parents Watts & Alice Barnes, sister Alice Elizabeth Barnes, and brother Watts Dewitt Barnes Jr. He is survived by his brother Harry Warren Barnes, niece Beverly Barnes Edwards, four nephews Kent Barnes, Terry Barnes, David Barnes, Warren Barnes, and numerous grandnieces, grandnephews, and many long-time friends. Charlie will be buried in Hillcrest Cemetery in Ardmore next to his parents with a graveside service scheduled for Wednesday, January 13, at 2:00. In lieu of flowers, Charlie desired contributions be made to the Billy Graham Crusades, 1 Billy Graham Parkway, Charlotte, NC 28201. If you would like to discover the truths Charlie preached, we encourage you to visit the Billy Graham website at billygraham.org

Nobody loved the Lord like Charlie Barnes. On Friday, Jan. 8th, Charlie finally got to see Him. Rev. Charles (Charlie) Herman Barnes was born on January 27, 1933, at the family&#8217;s home in Ardmore, Oklahoma. Charlie almost died as an infant... View Obituary & Service Information

The family of Charles Herman Barnes created this Life Tributes page to make it easy to share your memories.

Nobody loved the Lord like Charlie Barnes. On Friday, Jan. 8th,...