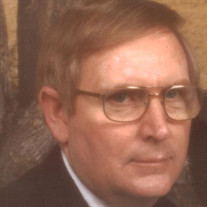 Cecil Tisdell entered Heaven's gates on February 27th, 2022. He was born on May 9th, 1935 in Pontotoc, OK. He was a devoted husband and father. He began life on the Tisdell Cattle Ranch near Connerville, Oklahoma. At age six, his father died, and he moved with his mother to Long Beach, California where she worked in the shipyards during World War II. A few years later, he returned to the ranch to live with his grandmother where he worked and continued his education. At 17, he enlisted in the Marine Corp during the Korean War. He arrived in Korea just as the war ended and was stationed there for over a year as part of the American peacekeeping force before returning to the states. Upon his return to Oklahoma, he met and married the love of his life Lucile Needham from Coleman, Oklahoma. He continued his education obtaining his bachelors and masters of education from Murray College and Southeastern State University. During this time, he and Lucile were blessed to bring daughters Kathy and Karen into the world whom he was devoted to throughout his life. He chose education as his profession teaching and serving public school students in various roles from teacher/coach to principal. Over his long career, he taught and served in Colorado, Oklahoma, and Texas. Another passion in Cecil's life was songwriting. He loved creating songs and was credited with writing over 135 songs and published many articles in digests and magazines. Hank Thompson was one of the artists who recorded his songs. He loved the Lord, his wife Lucile, and his daughters Kathy and Karen with all his heart. He was predeceased by his wife Lucile, his mother and father: Cecil Leroy Tisdell and Tessie Case. He is survived by his sisters Shirley Reeves and husband Harold and Lenora Barber and husband Russell, his daughters Karen Holland and husband Bob and Kathy Wesson and husband Ken. He is also survived by 4 grandchildren: Rylee Hunter, Jackie Coonrod, Heather Duval and Steven Holland. He had 6 great grandchildren: Raegan and Robert Holland, Kaylee and Kenna Duval and Madison and Matthew Coonrod. The visitation will be on Friday, March 4th at 1:00 at the DeArman-Clark Funeral Home in Tishomingo, OK with a funeral service celebrating his life at 2:00. Burial will follow at Mill Creek Cemetery.

Cecil Tisdell entered Heaven's gates on February 27th, 2022. He was born on May 9th, 1935 in Pontotoc, OK. He was a devoted husband and father. He began life on the Tisdell Cattle Ranch near Connerville, Oklahoma. At age six, his father died,... View Obituary & Service Information

The family of Cecil Wayne Tisdell created this Life Tributes page to make it easy to share your memories.