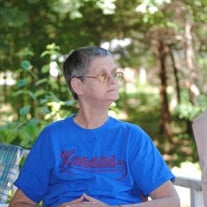 Cathy Louise Carter of Milburn OK was born on February 21, 1941, to Paul “Gene” and Lela (Littell) Hutchison in rural Barber County Kansas. The third of 5 girls, she went to school in Kiowa Kansas until 7th grade when the family moved to “town”, Medicine Lodge Kansas, where she graduated in 1959. She attended Southwestern College in Winfield, Kansas until she married Kenneth Carter in 1962. Four children were born to this union and the family moved to Milburn OK in 1971. In 1987, Cathy moved back to Kansas and worked at several jobs before landing her dream job running the bookstore at KU Medical School in Wichita KS. Cathy retired in 2013 and shortly thereafter, she moved back to Milburn to be closer to her kids and grandkids. Cathy loved reading, counted cross stitch, fishing and Friday and Saturday night card games. Cathy also loved spending time at any of the grandkid’s events she was able to make. Cathy passed away on May 30, 2022, at St Anthony's in Oklahoma City at the age of 81. She was preceded in death by her children’s father Kenneth Carter, her parents Gene and Lela Hutchison, her son David Carter, and sisters Billie Hutchison, Judy Angle, and Susan Rabenseifner. Cathy is survived by her children, daughters Ruby Whalen (Gary) and Barbara Kinney (Robert), both of Milburn, and son Paul Carter (Cindy) of Emet. Cathy had 9 grandchildren. Mike Whalen of Milburn, Ashtin Kinney (Dan Bonar) of Ada, Justin Whalen of Park City Kansas, Andrew Whalen (Hannah) of Shawnee, Lakota Russell of Milburn, Michael, Drew, and Hannah Kinney of Milburn and Hallie Bonar of Ada. Cathy was also looking forward to the birth of her first great-grandchild in September. She is also survived by her sister Lola French of Wichita, and multiple nieces and nephews. Cathy’s family will be having a family get-together on Saturday, June 4 at Milburn FBC and she will be interred at Riverside Cemetery in Kiowa KS, Saturday, June 25 at 7pm. In lieu of flowers, the family asks that donations be made to the Milburn FBC youth camp fund to sponsor a camper or the Kidney Foundation.

Cathy Louise Carter of Milburn OK was born on February 21, 1941, to Paul &#8220;Gene&#8221; and Lela (Littell) Hutchison in rural Barber County Kansas. The third of 5 girls, she went to school in Kiowa Kansas until 7th grade when the family... View Obituary & Service Information

The family of Cathy Louise Carter created this Life Tributes page to make it easy to share your memories.