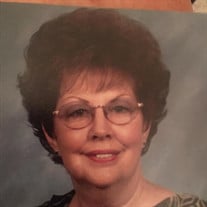 Caroline Lambert of Stratford, Oklahoma was born January 10, 1943 in Clinton, Oklahoma to Jess and Mary (Arter) Foshee . She passed away June 27, 2019 at her home south west of Stratford surrounded by her family at the age of 76 years 5 months and 17 days. She and her family moved to Gilbert, Arizona where she graduated high school. After graduation she worked at Kellwood. One evening she went to a dance with some girlfriends and met a young handsome Air Force boy named Travis Lambert. They were smitten with each other and they were married on April 25, 1964 there in Gilbert. Travis persuaded her to move to his home town of Stratford and this is where they raised their family. She began going to the First Baptist Church and gave her heart to Jesus. Shortly after Travis followed. They began to work in the church and she became the Church Secretary for the next 42 years and was still working up until just weeks before she passed. She was a faithful loving caring Christian lady. Loved the Lord, Travis, her children, grandchildren and great-grandchild. She will be missed by all of us in our little community. Preceded by; her parents, and husband Travis. Survived by; one daughter Sheryl Holland & husband Bobby of Vanoss, OK one son; Wade Lambert & wife Kristy of Wilson, OK. four grandchildren; Taylor Hanson, Jordan Dethloff, Jaysen Lambert, and Chance Holland. one great grandchild; Ethan Dethloff.; six brothers; Jerry Don, Randy, Gary, Lonnie & wife Cindy, Robbie, and Jeff & wife Brenda Foshee. all of Arizona. two sisters; Marilyn McLeod & husband Jerry, Debbie Scally & husband Wayne also of Arizona. Pallbearers; Wade Lambert, Jerry Don Foshee, Randy Foshee, Gary Foshee, Lannie Foshee, Robbie Foshee, & Jeff Foshee. Visitation; Monday evening July 1, 2019 from 5:00 PM to 7:00 PM at DeArman/Pickard Funeral Home. Services; will be Tuesday morning July 2, 2019 10:00 AM at the First Baptist Church, Stratford, OK. Officiating; Rev. Bill Rea and Rev. Keith Stevens. Burial will be in McGee cemetery Stratford, OK.

Caroline Lambert of Stratford, Oklahoma was born January 10, 1943 in Clinton, Oklahoma to Jess and Mary (Arter) Foshee . She passed away June 27, 2019 at her home south west of Stratford surrounded by her family at the age of 76 years 5 months... View Obituary & Service Information

The family of Caroline Lambert created this Life Tributes page to make it easy to share your memories.