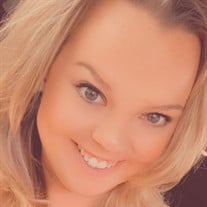 Funeral Services to honor and celebrate the life of Candace Harper will be held on Saturday, June 26, 2021 at 10:00 AM DeArman-Clark Funeral Home Chapel. Interment to follow at Rose Hill Cemetery in Ardmore. Family hour will be Friday, June 25 from 6:00 - 8:00 PM at the funeral home. On June 23, 2021, Candace “Girdie Sue” Dawn Harper received her angel wings at the early age of 32 as she entered the big white pearly gates of heaven. Candace was born on March 3, 1989 in Ardmore, Oklahoma. She was the youngest of a large group of cousins that loved her and will miss her dearly. She attended Lone Grove where she was active in 4H and FFA, where she had a true Christian leader for the FFA Program. She enjoyed showing cattle alongside her three cousins Matt, Brian and Mark. She was of Baptist faith accepting her Lord and Savior Jesus Christ in June of 2005. Her and her daughters are currently members of Trinity Life Church in Coleman, Oklahoma. She enjoyed butting heads with her mother; especially over cooking, because she thought she was going to be the next Paula Dean. She thrived in the kitchen cooking up the best meals anyone could ask for and she would cook for anyone. Even though her and her mom would butt heads they were each other’s best friends and had a special love for each other. The greatest accomplishment in her life was her three most precious, gorgeous and sweetest daughters that you could ever dream of Allie, Maddie and Addie. They were shared with their father, Corey Hice. They are the light of her life and she would do anything for them. When she would share stories about them her face would light up and have the biggest, prettiest smile on her face. When Girdie would enter the room, you knew that she was there listening to her music and her cap on her head and messy bun just bouncing around. She loved and lived life to the fullest. When she also heard her dad call her “Rainbow Bright” she knew that there was fixing to be a come to Jesus meeting. She also had a special love for her precious friends that are near and dear to her heart. She called her other mother, Momma Mia Maria and Adam Keiphey, known as Adam and Sylvia Workman. Candace is survived by her three daughters, Allie, Maddie and Addie; her loving and supportive parents, Ken and Janice Sliger of Coleman; Chris Harper of Ardmore was her birth father; fun loving brother, Cole Sliger and girlfriend Courtney Walker; friend who she thought of as her brother, Austin Vernon “Verny”; her go to and fix it all person, James Purcell “Dozer”; paternal grandparents, Bob and Joan Harper of Ardmore, Lynda Sliger of Milburn and the late Butch Sliger; a host of uncles, aunts and cousins who thought she hung the moon. Preceded in death by her grandparents, R.D. and Virginia Crosthwait and Richard Robinson aka “Unk Uggie” all of Ardmore. The highlight of her summers was getting the girls and going to the river with her dad and going to drift where the fish were extremely active so the girls could play with the gars going up the river. They would play and fish forever. Dad enjoyed taking them on any fishing trip he could. Candace will never, ever be forgotten by anyone who knew her.

Funeral Services to honor and celebrate the life of Candace Harper will be held on Saturday, June 26, 2021 at 10:00 AM DeArman-Clark Funeral Home Chapel. Interment to follow at Rose Hill Cemetery in Ardmore. Family hour will be Friday, June... View Obituary & Service Information

The family of Candace Dawn Harper "Girdie Sue" created this Life Tributes page to make it easy to share your memories.

Funeral Services to honor and celebrate the life of Candace Harper...