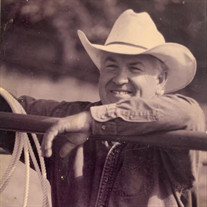 A graveside service to honor and celebrate the life of Butch Burns will be held at 11:00 AM Monday. April 27, 2020 at Tishomingo Cemetery. Online live stream of the service will be on the DeArman-Clark Funeral Home Face Book Page.( when we go live it will tell you) Viewing hours will be from 1:00 - 5:00 Sunday, April 26. “Butch” Joel Leo Burns was born on May 31, 1941 in Tyler, Texas to Leo and Malissa Jane Ballard Burns. He passed from this life at the age of 78 years 10 months and 23 days on April 23, 2020. Butch graduated Boling High School in Boling, Texas with the Class of 1959. He went to trade school where he studied to be an electrician. He spent his working years being an operations manager for different manufacturing companies. Butch and Oma Dell were married on July 17, 2015. He retired in 2017 from Mannsville Ag Center where he began working in sales in 2011 and was promoted to the chief operations manager. He remained a valuable asset to MAC as a consultant until his passing. After retirement, he enjoyed spending his time ranching and working his cattle business. His hobbies included; work, work and a little more work. You might say he was very business minded and that he was one of the hardest working men that you knew. Butch was always lining people out, especially his grandchildren, and making sure that they were working hard as well. He led an exciting life traveling all over the world for a lot of work and a little play. In his younger years, he enjoyed calf roping, rodeoing, and won several events. Butch was strong in his beliefs and had high expectations for himself and his loved ones. You always knew what was important to him and what he stood for. Butch had a servant’s heart and loved deeply, especially when it came to his family. Butch is preceded in death by his parents, Leo and Melissa Burns; grandson, Angel Fernandez and sister, Glenda Davenport. He is survived by his wife, Oma Dell Burns; brother and sister in law Lynn and Rebecca Loyd, children and spouses, Leslie and Blake Petrek, Jim Burns, Brady and Jill Burns, Sarah Fulton, Holly Fulton, Esther and Thomas Bautista, Christi and Tracey Griffin; grandchildren, Jessie Campion and husband Charlie, Melissa (Mimi) Holt-Petrek, Alec Burns, Evan Burns, Evelyn Anderson, Macheala Taylor and husband Austin, Tiffany Rodriguez and husband T, K.J. Adkison, Jaci Griffin, Landon Griffin; great grandchildren, Jaxon Beck and Leo Rodriguez, and many nieces, nephews, family and friends who will deeply miss him and his wisdom.

A graveside service to honor and celebrate the life of Butch Burns will be held at 11:00 AM Monday. April 27, 2020 at Tishomingo Cemetery. Online live stream of the service will be on the DeArman-Clark Funeral Home Face Book Page.( when we go... View Obituary & Service Information

The family of Butch L. Burns created this Life Tributes page to make it easy to share your memories.

A graveside service to honor and celebrate the life of Butch...