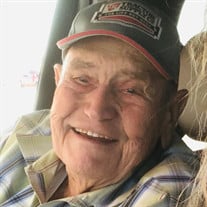 Funeral Services to honor and celebrate the life of Bob Goodson will be held at 10:00 AM Friday, September 13, 2019 at the Fillmore Nazarene Church. Interment to follow at Oaklawn Cemetery in Sulphur, OK. Family hour will be held at DeArman-Clark Funeral Home on Thursday from 7:00 – 8:30 PM. Bob Goodson left his home here on earth to live with his Lord and Savior Sunday September 8, 2019. He was 89 years old and truly a great husband, dad, step dad and if they were step grand children and step great grandchildren, they, nor he ever realized it, he was always grandpa and cowpa to the younger ones. He was born in Mill Creek on January 13, 1930 attended school there and after graduation he went into the Air Force. He was raised on a dairy north of Mill Creek; milking and hauling milk to the Kraft Plant in Sulphur when he was 14. The other milk hauler would let him cut in front of them so he could get to school on time. Bob married Charlene Harvey in December of 1983 and gained lots of children, grandchildren and great grandchildren; plus, and additional grandson through their years together. Bob had been a Ranch Real Estate Broker for 45 years and enjoyed showing ranches and meeting new people. He didn’t operate with a listing agreement; he said a hand shake was all he needed and he would go to work to sell the place. He was very successful. His hobbies were running his dozer and clearing land to make it productive. He always said if it could grow trees it could grow grass. He loved riding around, especially with great grand children on his RTV. Bob had lots of cousins that live in Texas; some his folks helped raise. He always said he had the best parents anyone could ever have; from them he learned to love everyone and he loved deeply. Bob loved his Lord, his church and church family and was on the board of trustees of Fillmore Nazarene Church. Bob was bigger than life. He is preceded in death by his dad, Obra Bob Goodson; mother, Ann Trout Goodson; son, Gerald Wayne Goodson; brother, Gerald Goodson of Davis, OK. He is survived by his wife, Charlene of the home; stepdaughter, Colleen Clothier and husband Brian of Wapanucka; step son, Mike Harvey and wife Caron of Moore; grandsons, Marcus Jerry and wife Jennifer, Luke Jerry and wife Abbi; granddaughters, Mackenzie Harvey-Taylor and husband Robert; plus bonus grandson Cheyenne Stanley and wife Kaci; great grandchildren, Adilee and Houston Jerry, Alex, Caden , Emmett, Brooks, Ellis Gene Jerry, Killiam Taylor and Benni, July and Stella Jean Stanley; sister, Betty Shaw and husband Elmo, nieces Cindy Wall and Family and Sandra McKee and family all of Meritt Island, Florida and a sister in-law, Tina Goodson of Davis, Oklahoma. In lieu of flowers, donations can be sent to Reaching Out Program of Johnson County, PO Box 773 Tishomingo, OK 73460 or to Fillmore Nazarene Church Building Fund, Church Treasurers at 1312 Densmore Street, Tishomingo OK 73460. Arrangements were made under the direction of DeArman-Clark Funeral Home in Tishomingo, OK. Family and friends can leave online condolences at www.dearmanfuneralhome.com

Funeral Services to honor and celebrate the life of Bob Goodson will be held at 10:00 AM Friday, September 13, 2019 at the Fillmore Nazarene Church. Interment to follow at Oaklawn Cemetery in Sulphur, OK. Family hour will be held at DeArman-Clark... View Obituary & Service Information

The family of Bobby Gene Goodson created this Life Tributes page to make it easy to share your memories.

Funeral Services to honor and celebrate the life of Bob Goodson...