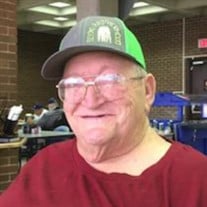 Billy Ray was born in Tyler, Texas, June 5, 1947 to Nora and Lessie Tate. He grew up in Tyler until he joined the Navy in 1965. Some of his time was stationed on a ship just off Vietnam. After the navy, Bill worked an assortment of jobs, including road construction and driving a truck. In his last years of working prior to retirement he owned his own truck and did trucking. Bill was married to Mary Tate and they raised Kelly, Nelson, Ricky, and Billy at Elm Mott, Texas near Waco. He lived in retirement there and enjoyed hunting deer and going fishing when he wasn’t fixing motors on small engines up to truck engines. Bill enjoyed riding his “trike” with his sons on motorcycle trips including coming to see his mom in Oklahoma. When he experienced severe health issues in 2018 and needed to have continues care, his desires were carried out by coming to stay with his mother at the Burford Nursing Home in Davis, then on to the Veteran’s Center in Sulphur when an opening came available. In the past few years he enjoyed playing Bingo and Dominoes along with going on trips to museums, car shows and football games with the center. He was an avid Dallas Cowboys fan and seldom missed a game. Bill looked forward to family reunions and now he is having a reunion is in heaven. Greeting him in heaven was a host of family including Bill’s step-father, Wayne Welty and his father, Les Tate. Grandparents Ben and Della Martin, daughter Kellie Radkiewicz; brothers: Ray Welty and Dewayne Tate; brother-in-law, Jim Day and several aunts and uncles. Left behind with beautiful memories are Bill’s former wife and his brothers in Texas: Mary Tate, Raymond Tate and Roger Tate. Bill’s children: Nelson Radkiewicz, Ricky Radkiewicz, and Billy Lee Tate, TX. Also are Bill’s siblings in Oklahoma: Robert W. Welty and wife, Cheri of Davis; Carleena L. (Welty) Day of Sulphur; and Gerald W. “Butch” Welty and Gaylynn of Wynnewood. Bill’s grandchildren Kali Garcia, Toni Garcia, Haley Tate, Rachel Tate, & Lilly Conyers of Texas; Great-great-grandchildren are Beau McCarthy, Korra Beherns, Bentley Ivey, and Kamdyn Ivey, are all of Texas. Surviving too, are Bill’s uncle, Jack Martin and Barbara of Texas, aunt Mary Waits and Robert, aunt Rita Martin and step-uncle Gerald D. Welty and Patsy, all of Oklahoma. Other nieces & nephews: Jaime E. Day, Sulphur; Sarah R. (Welty) and Len Keenan, Davis; Scott W. Welty and Cassidy, Dalhart, TX; James Welty of Georgia; Connie (Welty) and Jason Joyner; Joshua Welty and Amber; Jonathan Welty and Ceri, all of Florida. Great nieces & nephews are Dayne Bradley, Laynie Bradley, and Dayton Day of Sulphur; Jaysen Welty and Lillian Keenan of Davis; and Landri Welty of Dalhart, TX. Rebecca Welty of Georgia; Brock Joyner, Mallory Joyner, Faith Welty, and Cheyenne Welty, of Florida. Left behind also are friends from all over. Billy Ray Tate in Waco Memorial Cemetery at Waco, Texas. A “Celebration of Life” memorial for Billy Ray Tate and his mother, Nora M. Welty (who passed earlier during COVID shutdown) will be held on February 13. Contact family for more information on memorial. Arrangements by DeArman Funeral Home of Sulphur, OK online condolences may be sent to www.dearmanfuneralhome.com

Billy Ray was born in Tyler, Texas, June 5, 1947 to Nora and Lessie Tate. He grew up in Tyler until he joined the Navy in 1965. Some of his time was stationed on a ship just off Vietnam. After the navy, Bill worked an assortment of jobs,... View Obituary & Service Information

The family of Billy Ray Tate created this Life Tributes page to make it easy to share your memories.