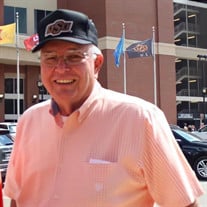 Bill was born on December 17, 1940 in Texhoma, Oklahoma To Darius and Lorene Barnum. Upon high school graduation, he attended Panhandle State University in Goodwell, Oklahoma and Oklahoma State University in Pre Veterinarian Medicine. He obtained his Bachler of Science degree from Oklahoma State University in 1963, as well as his Doctorate of Veterinary Medicine in 1965. Bill met the love of his life, Delma J Meyer in High School. They were married on August 25, 1963. Upon Bill's graduation, they moved to Beaver, Oklahoma, Starting a new veterinary clinic which was the only veterinary clinic in Beaver County. During this time, their first child, Mitchell L. Barnum was born. In 1970, they moved to Spearman, Texas, to join a three man veterinary clinic that focused on the development of feedlot operations. While there, their second son Matthew C. Barnum was born. In 1973 they ventured to southeastern Oklahoma in a family cow/calf operation ranch. 1977 brought yet another change to their lives. Bringing his family to Stratford, Oklahoma. Bill joined the Oklahoma Department of Agriculture in the capacity of Veterinary Circuit Supervisor. Bill became the Director of Food Safety Division in 1995. He worked in that capacity until retirement. Bill and Delma were fortunate to raise their boys on a small ranch in Stratford. They all grew to love God even more in their home and while attending Stratford Methodist Church. Bill served in many administrative capacities in their church. He was a man of God who loved God's creation and his Oklahoma State Cowboys! He was an avid fisherman, he loved making things out of junk, planting flowers, especially those that were orange and black, but most of all he loved spending time with his family. Bill taught his grandkids that there is more to Christmas than getting presents. Before presents were opened Bill always found a different way to read about how Jesus was born to give new life. Bill loved to entertain with fish fries, wiener roast, hayrides, reunions and any way he could visit with old and new friends. Bill called his daughters-in-laws beautiful! Bill is survived by his wife Delma of 58 years, his son Mitchell and wife Jessica, their two children Morgan and Brock of Stratford; his son Matthew and wife Karen, their two children Shelbi and Cole of Oklahoma City, Oklahoma; his brother-in-law Tim Meyer and wife Nancy of Texhoma, Oklahoma; his sister-in-law Evi Meyer of Frisco, Texas; and a host of nieces and nephews. Bill was preceded in death by his parents, his sister Sandy Freeman, and his brothers-in-law Carl Freeman and Robert Meyer. Memorial Services will be; 10:30 AM Saturday October 30, 2021 in the United Methodist Church in Stratford, Oklahoma.

The family of Bill Barnum created this Life Tributes page to make it easy to share your memories.