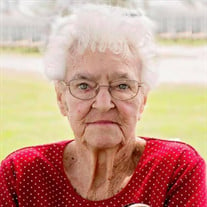 Funeral Services to honor and celebrate the life of Betty Jo Daniel will be held at 1:30 PM on Tuesday, April 27, 2021 at the First United Methodist Church in Tishomingo. Interment to follow at Tishomingo Cemetery. Family hour will be held on Monday from 6:00 - 8:00 PM. Betty Jo Clayton Daniel passed on April 23, 2021, at the age of 89 in Sherman, Texas, at Texoma Medical Center. Betty is survived by her children, Lilly and Jerry Wisdom of Tishomingo, Oklahoma, Ralph and Laurie Daniel, of Weatherford, Texas, and JoAnn and Bryan Barnes of Tishomingo, Oklahoma; her grandchildren, Chad Hughes, Megan and Greg Shelton, LeAnn and Jason Acker, Kacey and Justin Starr, Jessica Daniel, and Bailee and Caison Ballinger; her great-grandchildren Drayden, Waylee, Janet Rose, Ashton, and Amberlynn. Betty was born February 11, 1932, to the late John T. and Bernice Bullah Pugh Clayton in Sulphur, Oklahoma, and was the loving sister of five. She is survived by her youngest sibling Mary and spouse Reagan Hightower who reside in Stratford, Oklahoma. Perry Clayton, Velma Miller, Margie Garrett, and John Clayton precede her in death. Betty attended Wilson High School where she graduated in 1950. In 1952, Betty married the late Ira Ralph Daniel and had three children – Ralph, Lilly, and JoAnn. Since Ira was in the Navy, Betty and her family lived in many places within the United States including California and South Carolina. In 1958, the family moved to Tishomingo, Oklahoma, where she has resided for 63 years. Betty worked a variety of jobs in her lifetime. She worked as a telephone operator in Wilson, Oklahoma. Once she moved to Tishomingo, she worked at Miley’s Cable Company, Murray State College as a dorm mom, and Tishomingo Chevrolet after she retired. As one can tell, Betty loved working with the public and made many friends wherever she went. Betty was also involved in many organizations. She was a member of the Tishomingo Chapter of Eastern Star where she served as the Worthy Matron and other various offices for many years. Through Eastern Star, Betty met many lifelong friends and made many memories. She was also an active member in school-related events, even after her children graduated. Betty loved attending all Tishomingo sporting events, and when she could not attend, she would listen on the radio and cheer everyone on. Family was everything to Betty. There was not a day that went by that she did not have a telephone in her hand talking to one of her children, grandchildren, nieces, nephews, friends, and the occasional misdialed number. When she was not talking on the phone, you could find her driving around town. Even after she was unable to drive, she enjoyed going for rides with her family no matter where the destination. Betty was loved by many. Her door was always open to anyone in need, and she went above and beyond for everyone she loved. She answered to mom, sister, aunt, friend, granny and ninny because throughout her life she touched so many. It was known that if shelter was needed, there was no other place to go than the safe haven everyone called Betty Jo’s.

Funeral Services to honor and celebrate the life of Betty Jo Daniel will be held at 1:30 PM on Tuesday, April 27, 2021 at the First United Methodist Church in Tishomingo. Interment to follow at Tishomingo Cemetery. Family hour will be held on... View Obituary & Service Information

The family of Betty Jo Daniel created this Life Tributes page to make it easy to share your memories.

Funeral Services to honor and celebrate the life of Betty Jo...