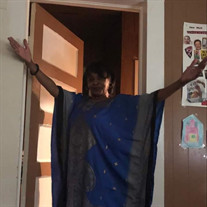 Belvie Delois Graves Allen was born on September 13,1956 at her home in Harris, Oklahoma. She was born to her parents Tom Edwards and Zelar Graves. She was the youngest of eleven children. Lois grew up in Harris, Oklahoma where she went to Riverside School. Lois graduated from Haworth High School in 1974. In High School, Lois served as the President of the Sociology Club. She was also active in several other school organizations. Lois loved to read and write. After graduating High School, Lois came to the town of Wynnewood, Oklahoma to visit her sister Mae Hall and never left. In Wynnewood, she met the love of her life Dale Allen Sr. They were married on February14,1975 in Wynnewood at her sister Mae’s home. That same year they welcomed (a son) Dale Jr and (a daughter) Malaysha. Lois worked for 30 years at Southern Oklahoma Resource Center. She loved her clients at SORC very much and often call them her children. She received several awards while working at SORC. Lois retired from SORC after 30 dedicated years. After retirement, she devoted herself to God and her grandchildren and went to work at the Willows Tree in Pauls Valley and retired for a second time. Lois was also a devoted and active member of Mt. Carmel Baptist Church. Lois continued her acts of service at Mt. Carmel volunteering at the Closet. Lois will be dearly missed by her family and friends. Proceeding her in death were her parents Tom and Zelar, her sister Clara Norwood and her brothers LC Graves, Willie Graves, and Clifton Norwood. Her surviving siblings are sisters Lillie (Michael) Major of Pauls Valley,Ok Mae (Danny) Hall of Wynnewood,Ok and brothers Eophus (Tammy) Graves of Okmulgee,Ok Iophus (Linda) Graves of Tulsa,Ok Johnny Graves of Broken Bow,Ok and Eddie (Janet) Graves unknown. Leaving to cherish her memories are her children Dale Allen Jr (Dejah) of Shawnee, Ok and Malaysha Allen Schramm (Duane) of Wynnewood,Ok eight grandchildren Arieana C. Allen Garrett of Moore Ok, Lhane Garrett of Moore Ok, Trinity Garrett of Wynnewood,Ok Serenity Garrett of Wynnewood Ok, D’Adrian (Tre) Garrett of Moore Ok, DaCyn Garrett of Moore, Ok, D’Allen Garrett of Wynnewood, Ok and Jericho Allen of Shawnee, Ok and her children’s father, her best bud, Dale Allen Sr of Wynnewood,Ok. She will also be missed by a host of nieces, nephews and other relatives.

Belvie Delois Graves Allen was born on September 13,1956 at her home in Harris, Oklahoma. She was born to her parents Tom Edwards and Zelar Graves. She was the youngest of eleven children. Lois grew up in Harris, Oklahoma where she went to Riverside... View Obituary & Service Information

The family of Belvie Delois Allen created this Life Tributes page to make it easy to share your memories.