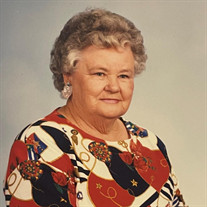 Augustine Edna Jones Keeling passed December 17, 2021 in Norman, Oklahoma. She was born in Garvin Co. near Stratford, Oklahoma to David Ruthie Jones and Edna Gladys McGuire Jones, August 26, 1928. Her father was a sharecropper and would sometimes have to leave them to find work, for a while they lived in a tent with relatives. She worked alongside her father and brothers in the fields pulling cotton, shaking peanuts, haling hay and attending animals. Her duties were to also care for her ailing mother with housework and tending to her younger sister. During her 9th grade in school her mother was hospitalized for an extended time, and she was told to drop out of school to become the cook and wash lady for the family. Saturdays were milk and egg days they would take them into town to sell; this was a real treat to get to go and visit with other folks. It was a hard life, but she was a tough and beautiful young woman. A friend of the family gave her picture to a lady who would become her mother-in-law to send her son who was serving in Japan during and after WWII. He was smitten by the picture and vowed as soon as he came home from the military, he wanted to meet her. She married Vaughnie D. Keeling, January 8th, 1949. Vaugh went to work operating heavy-duty machines for highway construction working all over the United States. Augustine followed him; they lived in a little camping trailer wherever the job site took them. Once their first child was school age, they rented a house near Galey then near Stratford, Oklahoma where she was a full-time homemaker and mother. Hard work, dedication to each other and family paid off. They bought acreage and built a home north of Stratford. Vaughn then got offers to work overseas, so Augustine became head of household raising daughters, tending the farm and taking on financial business by herself for months at a time. Once the children were gone from the home, she traveled to meet him in some of the foreign countries he worked in. After Vaughn passed away in 2006, she lived by herself on the acreage. She was a woman of faith, attending church regularly. She suffered a stroke at the age of 85, under doctor’s orders she moved to assisted living first in Ada, then Tulsa, then to Arbor House in Norman. Many years of life experiences made for lots of good and bad stories to tell. She kept the staff and other residents entertained; the staff called her grandma. They loved her and made it possible for her to live her final days in her little apartment. She loved pretty dresses, shoes, costume jewelry, bright red lipstick and pretty cars. Her love for all kinds of music, playing the guitar, singing with her children, sister and brothers, introduced all kinds of music to her daughters. Her favorite past time was sketching figures and painting pictures. She was preceded by her father, mother and two brothers, Roscoe and Rufus Jones; sister, Clora Mae Jones Nelms; daughter, Roberta Keeling Stone; grandsons, Derrick Maddox, Michael McGregor and Mark Stone. She is survived by her daughter, Reba Keeling Olkinetzky and husband, Joe of Norman; son in law, David Stone of Stratford; daughter, Lora Keeling McDermott and husband Pat of Pawhuska; grandsons, Glenn Stone of St. Louis, MO, Steven McDermott of Pawhuska; granddaughter, Laurel Olkinetzky of Missoula, MT; granddaughter-in-law, Misti McGregor of Goldsby; great grandchildren, Mac McGregor of Purcell, Tyler Newby of Lindsay, Eva McGregor of Goldsby, Jacob Stone of Florida. In lieu of flowers the family asks that you contribute to the Oklahoma Medical Research Foundation for Neurological Diseases or a charity of your choosing. Funeral Services will be held at 1:00 PM on Monday, December 27, 2021 at DeArman-Pickard Chapel. Interment to follow at Memorial Park Cemetery in Ada.

Augustine Edna Jones Keeling passed December 17, 2021 in Norman, Oklahoma. She was born in Garvin Co. near Stratford, Oklahoma to David Ruthie Jones and Edna Gladys McGuire Jones, August 26, 1928. Her father was a sharecropper and would sometimes... View Obituary & Service Information

The family of Augustine Edna Jones Keeling created this Life Tributes page to make it easy to share your memories.