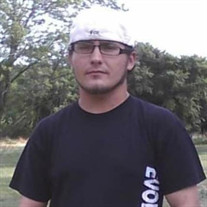 Anthony Sloan Bonnell (Ant as he liked to be called) was born on February 21, 1986 in Ardmore, Oklahoma to Gordon and Shauna Bonnell. Ant left this world on June 11, 2021 at the age of 35 years 3 months and 11 days at his home in Coleman, Oklahoma. Ant grew up his younger years in Lone Grove, OK before moving to Milburn. He graduated from Milburn High School. His dad taught him to weld and be a mechanic at an early age. After graduation, he went on to attend the Tulsa Welding School where he graduated ahead of his class. Ant loved low rider trucks and his passion was working on these trucks to see how low he could get one and how high he could get one to bounce. Ant was a good mechanic and could fix anything he worked on. Ant had a big heart and would help anyone out. He lived and took care of his memaw until she had to be put in a home. He loved his friends and family dearly. Ant is survived by his mother, Shauna Dunn of the home; father, Gordon Bonnell and wife Sherry of Lone Grove; brother, Jeremy Gill of Harrah; uncle Peter and wife Rosie of Boston, MA; grandmothers, Maxine Neely of Milburn, Billie Jean Bonnell of OKC; uncle, Bret Converse of Milburn; aunt, Laura Dodd and David of Germany; cousins, Bree Ann and Payton Dodd of Virginia, Preston, Creed and Cager Converse of Milburn, Wyatt Hodges of Ardmore, special little sister he claimed as his own Addison Gratz of Tishomingo; his one and only true love, Chelsea Carroll of Tishomingo; and a host of other family and friends. Ant is preceded in death by his maternal great grandparents, Bert and Avor Converse, George and Elizabeth Dunn; grandfathers, Buster Dunn, Sonny Neely; paternal great-great grandparents, Ben and Dora Palmer; great grandparent, Lee Wallace and Lois Atteberry, grandfather, Gordon Bonnell Sr. Funeral Services to honor and celebrate Anthony's life will be held on Wednesday, June 16 at 2:00 PM at DeArman-Clark Funeral Home Chapel. Interment to follow at Condon Grove Cemetery in Milburn. Family hour will be from 5:00 - 7:00 PM on Tuesday.

Anthony Sloan Bonnell (Ant as he liked to be called) was born on February 21, 1986 in Ardmore, Oklahoma to Gordon and Shauna Bonnell. Ant left this world on June 11, 2021 at the age of 35 years 3 months and 11 days at his home in Coleman, Oklahoma.... View Obituary & Service Information

The family of Anthony Sloan Bonnell created this Life Tributes page to make it easy to share your memories.

Anthony Sloan Bonnell (Ant as he liked to be called) was born...