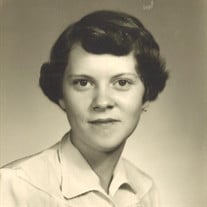 Alma Scribner Houser “Gone Fishin’” Alma Marice Scribner Houser was born on August 20, 1937, to Emma and Floyd Scribner in Fillmore, Okla. She died February 27, 2020, at St. Anthony Hospital in Oklahoma City after heart surgery. She was 82 years old. Alma was a devoted wife, a loving mother and GiGi, a loyal friend, a dedicated educator, a fearless adventurer and a legendary fisherman. She was a Milburn High School graduate, attended Cooke County Junior College and received her bachelor’s and master’s degrees from Southeastern Oklahoma State University. Alma taught for 35 years in schools in Marietta, Connerville, Tishomingo, Ravia and schools in Alaska and Texas. Prior to her years as an educator, she was a social worker for DHS and worked for Dr. F.E. Webb’s clinic. Alma married Charles Houser on July, 17, 1954, when both were still in high school. They were married for 17 years, were apart for 47 years, then remarried on November 6, 2018. She told Charles recently that being with him this past year was the happiest she’s ever been. She and Charles have three children, Boyd, Rickey and Tracy. Alma loved spending time with her family, including cooking with her great-grandchildren and watching ball games and other activities of her children and grandchildren. She also enjoyed the moments and memories she made with her large extended family. Alma also loved to sing with her siblings during reunions, Christmas parties and other special occasions. Alma loved to listen to live music, including taking frequent trips with friends to hear her favorite saxophone player perform in Texas. Alma also enjoyed dancing and oftentimes she’d call on her brother, Jimmy, to be her dance partner. Fishing was Alma’s favorite hobby and she was known as the “Crappie Queen” and “Fish Whisperer.” She could catch fish when no one else around her could get a bite. Some of her favorite fishing partners were her parents, sister, Nila, and niece, Natalie Davison. She loved to introduce others to her hobby, and she fished with friends who were from the West Coast to the East Coast. Last summer was a record year for Alma’s fishing. She ran trot lines with Boyd, Rickey, Carolyn and Natalie; great-grandkids, Case and Bentlee; and longtime friend, Ron Hutchings. The group caught so many fish that everyone ran out of freezer space for the fish. Alma loved every moment of the experience. Alma also was well known for her famous hushpuppies, fried fish and tartar sauce. She and Nila would host a fish fry for Boyd during his basketball tournaments. Teams hoped they’d get invited to the tournament just so they could enjoy the cooking. Alma also would share her cooking talents, including teaching her young fishing buddy, Price Rowe, how to make her hushpuppies. Alma cooked for many others, including family gatherings and benefits for Johnston County Reaching Out, an organization that was dear to her heart. Alma loved spending time with friends, whether that was enjoying coffee at the Dairy Queen or shopping trips. She also loved getting manicures and had the best manicured nails of any fisherman on the lake. Alma was always ready for an adventure and traveled with friends and family throughout the United States and to Mexico, Ireland, Germany, France, Jamaica and Grand Cayman. Faith played a vital role in Alma’s life. She attended Fillmore Church of the Nazarene and the First United Methodist Church, and her morning routine was spent praying and reading her Bible. She always kept her Bible and a devotional next to her recliner. When the weather was nice, she’d take the books to her porch to read and pray. Charles would join her later and the two would watch hummingbirds fly around. Alma drew strength from her dedication to the Lord and modeled God’s love through her compassion and support for others. Throughout her life, Alma was brave, strong, wise, generous to all, kind and encouraging. She never met a stranger and was always willing to invite new people to eat anytime she organized a fish fry. She loved laughing, telling jokes and stories and talking with her loved ones around a kitchen table. Alma was always quick with a hug, words of hope and an abundance of love. Alma’s legacy was one of faith, family, friendships and a shining example of enjoying life to the fullest. She is survived by her husband, Charles, of Milburn; children, Boyd Houser of Tishomingo, Rickey Houser and wife, Carolyn, of Milburn, and Tracy Reynolds, of Tishomingo; grandchildren, Sharla Bardin, Jeremy Bardin, Chrissea Jackson, Chanet Huckaby and husband, Keith, Cody Reynolds (who has always maintained that he was GiGi’s favorite) and wife, Kellie, and Tyler Reynolds and wife, Jacy; great-grandchildren, Charlee, Case, Jorey, Kambree, Carter, Ian, Bentlee, Maverick, Kennedy, Haven, Collins, Raelee, Siena, Adelaide and Elaina; sister Nila Adams and husband, Jerry; brother Jimmy Scribner and wife, Linda; brother-in-law Glenn Moore; uncle Herb James; aunt Julie Locke and many nieces, nephews and a multitude of friends near and far. Alma was preceded in death by her parents, Emma and Floyd Scribner; sister, Floy Jean Moore; niece, Latricia “Nucy” Caldwell; daughters-in-law, Tena Houser and Rebecca Houser; and in-laws, C.B. and Beth Houser. Visitation is Friday, March 6, 2020, from 6 to 8 p.m. at DeArman-Clark Funeral Home in Tishomingo. The memorial service is Saturday, March 7, 2020, at 2 p.m. at Tishomingo First Assembly of God. In lieu of flowers, donations can be made to Johnston County Reaching Out.

The family of Alma Marice Houser created this Life Tributes page to make it easy to share your memories.